On the taxonomy of the first record of rare deep-water rough shark species of Oxynotidae (Chondrichthyes: Squaliformes) in the western Indian Ocean

Abstract: An immature female specimen of rough shark was collected south of Reunion Island in the Madagascar Basin in 2009 aboard R/V Dr. Fridtjof Nansen, representing the first official record of the family Oxynotidae in the western Indian Ocean.  The specimen is herein identified as Oxynotus sp. due to morphological differences with its closely similar congeners O. centrina and O. bruniensis regarding morphometrics, shape of dorsal, pectoral and caudal fins, shape of the head and colouration, refuting the hypothesis of occurrence of these two species in the region.  These results indicate that Oxynotus sp. is possibly an undescribed species.  A general description of the external morphology, external morphometrics and photographs of Oxynotus sp. are provided.  The specimen has a hepatosomatic index of 36.33% which reveals that it was possibly approaching maturation, suggesting that a viable population of Oxynotus sp. exists in the western Indian Ocean.  Intraspecific variations in O. centrina from the Mediterranean Sea and eastern Atlantic Ocean are also noticed, requiring further taxonomic scrutiny.

Copyright: © Viana & Lisher 2018. Creative Commons Attribution 4.0 International License. JoTT allows unrestricted use of this article in any medium, reproduction and distribution by providing adequate credit to the authors and the source of publication.

Author Details: Sarah Viana is a research associate at the South African Institute for Aquatic Biodiversity with expertise in taxonomy, phylogeny and biogeography of Chondrichthyes, especially Squaliformes. Her currently interests are conservation genetics and molecular phylogeography of southern African endemic species. Mark W. Lisher worked for several years in the field of collection management and biodiversity data in South Africa. Currently, he is a MSc scholar at The Scottish Association for Marine Science. His interests are ichthyology, biodiversity, and taxonomy of marine fishes.

Author Contribution: SV and MWL contributed equally in the conceptualization, collection and analysis of data, discussion of the results and writing up of this manuscript.

Acknowledgements: The authors thank O. Gon, A. Whitfield, R. Bills, B. Konqobe and N. Mazungula (SAIAB), and E. Mitchell (SAMS) for curatorial and technical assistance. Special thanks to A. Hay and M. McGrouther (AMS) for providing information on comparative material, and A. Orlov (VNIRO) for helping with acquisition of original descriptions.  The first author was supported by the South African Institute for Aquatic Biodiversity.

Oxynotus centrina is usually distinguished from its congeners by having grey or brownish grey body with broad dark brown blotches dorsal-laterally, eyes with heavy supra-ocular ridge and knobs, spiracles large and vertical (Compagno 2016), and few proportional external measurements (e.g., dorsal fin-spines and first dorsal-fin apex, precaudal length and origin of first dorsal fin spine) (Yano & Matsuura 2002).  It inhabits muddy and coralline algal bottoms of continental and insular shelves and upper continental slopes between 40–800 m depth, and is occasionally caught as bycatch during trawls and longlining (Ebert & Stehmann 2013; Ragonese et al. 2013; Compagno 2016).  This species occurs throughout the Eastern Atlantic Ocean from Norway to the western coast of South Africa (Bass et al. 1976; Cadenat & Blache 1981; Ebert & Stehmann 2013; Ebert 2015; Compagno 2016).  According to Ebert & Stehmann (2013), Compagno et al. (2015), Ebert (2015) and Compagno (2016), O. centrina or a separate similar species possibly occurs in Mozambique, or off Madagascar (Ebert & van Hees 2015).  Ebert (2013) and Weigmann (2016) later listed O. centrina in the western Indian Ocean although without scrutiny, indicating that the identification of this species or any other member of Oxynotidae in the region is uncertain.  Fricke et al. (2018) inaccurately listed this species as from off northern Madagascar, representing the first official record of Oxynotidae in the region, but again without detailed taxonomic information.  The present study thus aimed to provide a general morphological description, external morphometrics, details of the collection and biological data of this specimen, and to clarify the occurrence of Oxynotidae in the western Indian Ocean. Taxonomic problems on species of Oxynotus are also discussed herein.

The southern Indian Ocean seamounts cruise expedition was undertaken aboard the R/V Dr. Fridtjof Nansen along the southwestern Indian Ridge between 12 November and 19 December 2009.  During this cruise, a single specimen of Oxynotus sp. was captured on 14 November 2009 during Trawl 1, Station 2, Madagascar Basin, south of Reunion Island, Event 7, at a maximum depth of 600m using a pelagic Ǻkra trawl net fitted with a multisampler.  The Ǻkra trawl net used was a Flytetrål 152 MSK x 3200mm, with a 20m net mouth opening (Rogers et al. 2010).  Prior to each trawl, ice-trays and labels were prepared for sorting.  Once on deck, samples were emptied into large trays containing ice.  A small amount of seawater was added to the trays to prevent the samples freezing to the ice.  Specimen of Oxynotus sp. was labelled by tying a label to the fish using string, then either fixed in a 4% formalin solution or frozen (Rogers et al. 2010).  This specimen was later donated and logged at the South African Institute for Aquatic Biodiversity (SAIAB) where further curatorial procedures such as identification and cataloguing took place, and put through a series of 10% and 50% ethanol solutions, before finally being preserved in 70% ethanol solution.

Biological traits. The specimen weighed a total of 1.944kg.  The liver is markedly heavy with total weight of 518g, entirely occupying the abdominal cavity.  It comprises two asymmetrical lobes, somewhat cylindrical, triangular in cross-section, pointed distally and convex proximally.  Liver lobes are conspicuously elongate with right lobe measuring 275mm and left lobe 262mm in length.  The hepatosomatic index (HSI) for the specimen is 36.33%.  According to Capapé et al. (1999) adult females show HSI ranging from 23%–42% while Megalofanou & Damalas (2004) noticed 18.8% HSI for a gravid female of O. centrina, supporting that HSI considerably decreases in breeding females.  The hepatosomatic index in the immature female of Oxynotus sp. comprises twice that of gravid females of O. centrina. Capapé et al. (1999) stated that the HSI of O. centrina increases as juveniles approach maturation, taking this into account the high HSI of Oxynotus sp. indicates that the specimen was possibly approaching maturation at the time of capture.  Thus, a viable population of Oxynotus sp. may exist within the Madagascar Basin, although this is the only official record of this species and family from the region suggesting that the population is rather small and vulnerable. 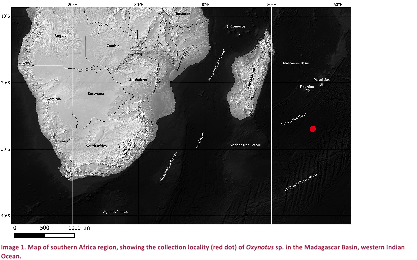 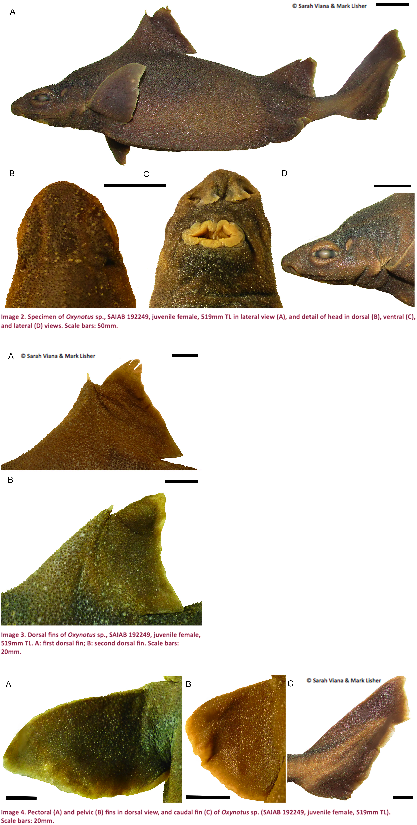 Table 1. External measurements for Oxynotus sp. (SAIAB 192249) expressed as percentage of the total length (% TL). TL is given in millimeter. Morphometrics of O. centrina are summarized as mean values for comparisons.

Bass et al. (1976) stated that the interdorsal space as percentage of precaudal length in specimens from the southeastern Atlantic Ocean (e.g., Angola, Namibia and South Africa) is smaller than those from the northeastern Atlantic Ocean and Mediterranean Sea.  According to Yano & Matusuura (2002), interdorsal space as percentage of precaudal length overlaps in O. centrina and the specimen of Oxynotus from Namibia (29.1%–34.6% PCL vs. 30.1% PCL).  Oxynotus sp. from the western Indian Ocean shows a much smaller interdorsal space, corresponding to 25.8% PCL, which is in accordance to the results of Bass et al. (1976) and against those of Yano & Matusuura (2002).  It is important to notice, however, that the measurement provided in Yano & Matusuura (2002) for the Namibian specimen was calculated from the illustration taken from Bass et al. (1976), which might have interfered in their results. When the interdorsal space is calculated as percentage of total length, Oxynotus sp. (20.7% TL) and O. caribbaeus (19.2% TL) taken from Yano & Matsuura (2002) overlap with those of O. centrina (18.0%–21.0% TL). Interdorsal space in Oxynotus sp. clearly differs from those of O. bruniensis (12.7% TL), O. japonicus (16.7% TL) and O. paradoxus (21.9% TL) taken from Yano & Matsuura (2002).

Oxynotus sp. may represent a species distinct from the Mediterranean O. centrina and possibly an undescribed species. The present study clarifies that this species occurs in the Madagascar Basin from off south Reunion Island (not northern Madagascar as seen in Fricke et al. 2018) and speculative records elsewhere (e.g., Mozambique and Madagascar) requires future scientific expeditions in the region.  To elucidate the taxonomic status of this species an ongoing taxonomic investigation on species of the genus is being undertaken (Viana & Lisher in prep.) by integrating molecular analysis of the preserved specimen and comparative morphological examination of material from the Eastern Atlantic Ocean, particularly specimens from South African and Namibian waters, as well as congeners described elsewhere.  Elucidation of the taxonomic status of other available nominal species is also essential such as O. shubnikovi Myagkovi, 1986 from off Kunene River in Namibia.  This species is considered junior synonym of O. centrina in Yano & Matsuura (2002), Compagno (2016), and Weigmann (2016) due to overlapping of external morphological characters and interdorsal space.  Vasil’eva et al. (2001), however, considers O. shubnikovi as valid following earlier assumptions of Bass et al. (1976), Myagkov (1986), and Compagno et al. (1991).

Preliminary comparative morphological observations in O. centrina reveal strong intraspecific variations between specimens from the eastern and western Mediterranean Sea as well as northeastern Atlantic Ocean regarding shape of dorsal and pectoral fins, body colouration and body depth.  External measurements also vary for trunk height, interorbital and internarial spaces, mouth width, preoral length and heights of first and fifth gill slits, length of first dorsal-fin base, and length of second dorsal-fin posterior margin (see Table 1).  These variations possibly represent the existence of another nominal species distinct from O. centrina in this region as well. Oxynotus salviani Risso, 1827 described from Nice, France has been in synonymy with O. centrina without detailed taxonomic examination in Krefft & Tortonese (1973), demanding verification. Divergences on the morphometric methodology applied in earlier accounts on species of Oxynotus (e.g., Yano & Murofushi 1985; Myagkov 1986; Yano & Matsuura 2002; Kousteni & Megalofonou 2016) and the present study exist, and may have interfered in the assumptions pointed out in the present study, indicating that a standardization of external measurements for Oxynotus species is essential for future comparative purposes.  The differences and intraspecific variations observed in the external morphology among species of the genus, however, denote that the taxonomy of the group is more complex than previously noticed.  Re-evaluation of these morphological aspects combined with molecular analysis of species of Oxynotus, especially Oxynotus sp. and O. centrina, is urgently required in order to elucidate if Oxynotus sp. is a valid species and if O. centrina comprises a species with broad geographical distribution and strong intraspecific variations or if it has been misidentified with other regional congeners (e.g., O. paradoxus).

Oxynotus sp. is a rare deep-water species, possibly comprising a small and vulnerable population with scattered endemic distribution in the western Indian Ocean.  Fishery trends are currently shifting from targeting coastal habitats to abyssal basins where fish stocks are still widely available for exploitation, including the Madagascar Basin where this species occurs.  Thus, it is assumed that Oxynotus sp. may occasionally be caught as by-catch during bottom trawls by commercial vessels in this region, as it is noticed for its congeners elsewhere, including O. centrina, O. bruniensis, and O. japonicus (Francis 2003; Yano 2004; Bradaï et al. 2007).  Moreover, the high HSI of this species provided in this study indicates that the population of Oxynotus sp. is approaching the breeding stage of the life cycle, making this species even more vulnerable to fishing threats.  It is of urgent conservation concern to consider Oxynotus sp. as a species vulnerable to overfishing, even though fisheries have no apparent economic interest in rough sharks.