Copyright: © Zahid et al. 2018. Creative Commons Attribution 4.0 International License. JoTT allows unrestricted use of this article in any medium, reproduction and distribution by providing adequate credit to the authors and the source of publication.

Abstract: The present study documents a unique case of capture myopathy as a fatal consequence of the capture and rescue of a Himalayan Ibex kid.  The ibex died 48 hours after capture without any visible clinical signs.  Necropsy revealed alterations in kidneys with necrosis of the renal cortex, degeneration of tubular cells and congestion as the main histopathological alterations.  Lesions in the heart consisted of multifocal degeneration of myofibres as well as hyalinization and nuclear degeneration with pyknosis.  Skeletal muscles appeared macroscopically normal but on histopathology showed mild to moderate degeneration and fragmentation with intermittent loss of striation.  The pathological findings were indicative of peracute capture myopathy.  To our knowledge this is the first report of capture myopathy in a Himalayan Ibex from India underlining the importance of understanding the causes of mortality in such wild species as a prerequisite to their successful conservation.

The Himalayan Ibex Capra sibirica is a member of the family Bovidae, sub-family Caprinae and is a true goat species.  Being a ‘sturdy, thick-set goat’ (Prater 1980), the animals have a short broad face with a long beard in males but short one in females (Schaller 1977).  The geographic distribution of Himalayan Ibex includes parts of China (Reading & Shank 2008; Xu et al. 2012), India (Gaston et al. 1983; Fox & Johnsingh 1997; Namgail 2006), Afghanistan (Heptner et al. 1961; Habibi 1997), north-eastern Uzbekistan, Tajikistan, Kyrgyzstan, Pakistan (Reading & Shank 2008; Li et al. 2015) and the Karakoram, the Himalaya and the Trans-Himalayan regions of Jammu & Kashmir (Fox & Johnsingh 1997).  In India, the Himalayan Ibex is protected and included in the Schedule I of the Indian Wildlife Protection Act 1972 (Anon 1992).  And its conservation is a priority.

Conservation plans are developed for wild animals around the world, in which capture and rescue operations are of paramount importance.  Attempted in the interest of conservation of the concerned wild animals, capture can be detrimental causing extreme stress and fear in rescued wild animals leading to capture myopathy and eventual death (Spraker 1982; Ebedes & Raath 1999; McLaren et al. 2007).

Capture myopathy or exertion rhabdomyolysis is a metabolic muscle disease of wild mammals and birds (free ranging and captive) associated with the stress of capture, restraint and transportation (Williams & Thorne 1996).  The four clinical syndromes of capture myopathy documented in wild animals include capture shock syndrome, ataxic myoglobinuric syndrome, delayed peracute syndrome and ruptured muscle syndrome (Spraker 1993).  The delayed peracute syndrome is usually seen in animals in captivity for at least 24 hours.  These animals appear normal while undisturbed, but if recaptured or suddenly stressed they die within several minutes.  The pathogenesis of the syndrome is a complex phenomenon confronting wildlife experts since ages, however, it is argued that the increase in stress-related catecholamines affects both cardiac and muscular systems, causing severe muscle damage, rhabdomyolysis and myoglobinuria (Spraker 1993).  All the stages of the syndrome are potentially fatal due to cardiogenic shock, renal failure, metabolic disorders or chronic cardiac damage (Spraker 1993).

On 23 August 2017, an orphan Himalayan Ibex kid was rescued from Mahaguns Top Pahalgam (35.1720N  & 75.5010E).  The female Ibex kid was found abandoned by the field staff of the department who later captured the animal by physical handling apparently without use of any anaesthetic, tranquilizer or sedative. The kid was translocated to the mini zoo of Pahalgam (34.0310N &  75.3090E) in a transport box and was then placed in an observation and quarantine room.  The observation room is situated away from the main enclosures with very little human interference, and is maintained in a way to simulate a natural environment for the rescued animals.  Strict hygiene is maintained with foot baths containing bactericidal and virucidal agents, which are placed both at the entry and exit points.  Separate utensils, equipments, clothing  are provided for the personnel attending the animals in the quarantine area.  Immediately after being rescued the animal was examined; it was approximately three months old, weighed 4.4kg and was found in good body condition showing no apparent signs of capture myopathy.  The animal was further monitored closely for any signs of capture myopathy or abnormal behaviour.  The animal died 48 hours after being captured without showing specific clinical signs.  A complete necropsy was conducted within two hours of death.  Samples were taken from the heart, kidneys, liver, lungs and skeletal muscles and were fixed in 10% neutral buffered formalin and embedded in paraffin wax, and sections (4mm) were stained with hematoxylin and eosin for routine histopathological examination.

The external examination of the carcass revealed no lesion or violence inflicted injury.  Also on dissection most organs appeared grossly normal only the heart showed focal to diffuse sub pericardial haemorrhages  with clotted blood in all the four chambers (Images 3 & 4).  But histopathological examination revealed changes in kidneys, heart, liver and skeletal muscles.  The skeletal muscles showed mild to moderate degeneration and fragmentation with intermittent loss of striation (Image 1).  Vascular congestion was found in the liver.  The lung parenchyma showed focal alveolar emphysema with atelectasis as a main histopathological feature (Image 2).  Myocardial lesions consisted of multifocal degenerative changes of myofibres, hyalinization and nuclear degeneration with pyknosis (Image 5).  Both the kidneys were found to have developed hydronephrosis with severe congestion (Image 6).  Renal cortical necrosis, degeneration of tubular cells and congestion were the marked the changes in the renal parenchyma (Image 7 & 8).  Some other changes were increased bowman’s space with or without serous exudate.  The histopathological changes in different organs were suggestive of peracute capture myopathy.

Capture myopathy is likely to occur when the capture procedure is tedious involving vigorous exercise, scaring and tense situations or the excessive use of tranquilizers.  In this case the subject animal developed capture myopathy in absence of all these factors and the myopathy was in this case only caused by stress.  Assessment of stress would have required measuring of cortisol levels in the animal after capture so that treatment measures could have been initiated.  The gross changes observed during post-mortem examination in heart and kidneys indicated that the animal collapsed due to acute cardiac and renal failure both of which are the manifestations of rhabdomyolysis (Spraker 1993; Guis et al. 2005; Herráez et al. 2007).  Renal changes leading to nephrosis and multiorgan failure as observed in this case have been previously reported to be the central pathway of capture myopathy (Montane et al. 2002; Herráez et al. 2007; Nuvoli et al. 2014).  The myocardial lesions are attributed to elevated concentrations of endogenous catecholamines during stress and trauma (Jiang & Downing 1990; Harrez et al. 2007).  Myocardial lesions are also frequently implicated as an important reason for sudden death under extreme stress in wild animals and birds (Turnbull & Cowan 1998).  These findings are supported by Wallace et al. (1987) who reported similar myocardial lesions in case of acute and delayed capture myopathy in African wild ungulates.  The changes in skeletal muscles observed in the present case can be attributed to exertion, trauma and polysaccharide storage myopathy during rescue and capture procedure leading to ischemia of muscles and subsequent myocytolysis (Montane et al. 2002; Guis et al. 2005; Nuvoli et al. 2014).  Similar findings in liver and lungs are reported by McAllum (1978) in a study of capture myopathy in Red Deer.

The case has been described as delayed peracute capture myopathy due to the fact that the ibex kid was apparently normal up to 48 hours after capture followed by sudden peracute death.  Absence of prominent clinical signs and presence of characteristic histopathological findings in different organs further supported this diagnosis.  The classification of this case as delayed capture myopathy follows Spraker (1993).  And like previous studies, the present study also supports the fact that wild animals like the Himalayan Ibex capture myopathy is a fatal consequence of stress during capture and handling.  Thus, wildlife personnel should exercise extreme care during trapping, handling and transportation of such endangered wild animals.

To the our knowledge this is the first report of capture myopathy in a Himalayan Ibex from India warranting further studies of the causes of mortality in such wild species as a prerequisite for a successful conservation programme.  Moreover, special attention needs to be paid to issues including animal welfare and qualification and skills of the personnel who manage capture and rescue operations. 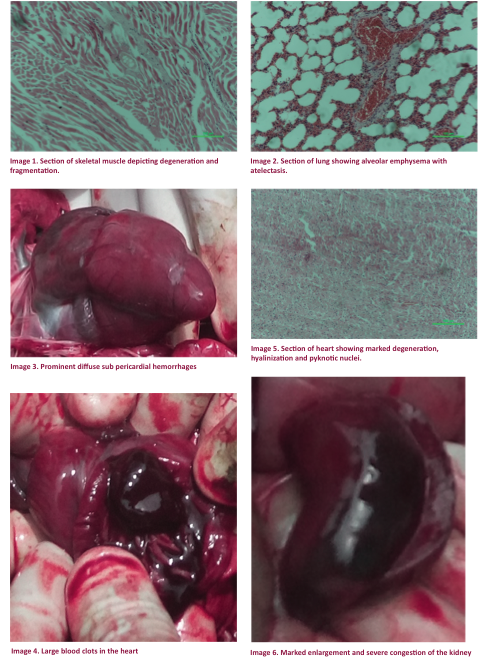