Abstract: This study presents efforts made to re-discover the narrow Algerian endemic Adenocarpus faurei Maire and the possible implications of this on the conservation of the Tiaret area in northern Algeria.  Field investigations within an expanded perimeter around known historical localities were carried out over a period of five years.  This prospecting effort yielded no positive sightings highlighting the very probable extinction of Adenocarpus faurei, and the lack of novel field data for many plants of high conservation priority in Algeria.

Copyright: © Miara et al. 2018. Creative Commons Attribution 4.0 International License. JoTT allows unrestricted use of this article in any medium, reproduction and distribution by providing adequate credit to the authors and the source of publication.

Funding: There is no funding agencies or organization for this work.

Acknowledgments: The authors would like to thank Dr. Irene Teixidor (University of Reading, UK) for editing the English usage in the manuscript.  We would like to express our gratitude to the anonymous reviewers who contributed to improve this manuscript.

Ranking amongst the eight richest global biodiversity hotspots (Myers et al. 2000), the Mediterranean basin has long been recognised for its high diversity and endemism levels (Quézel & Médail 2003).  It is estimated that around 10% of the global vascular plant diversity can be found in this basin, despite only representing 1.6% of the global surface area (Médail & Quézel 1997; Véla & Benhouhou 2007).  Being part of the Baetic-Riffian hotspot and home to around 3150 vascular plant species (Greuter 1991), of which 430 taxa are strictly endemic, 80 are rare, 31 are endangered and 22 vulnerable (Dobignard & Chatelain 2010–13), Algeria plays an important role in the conservation of Mediterranean floral diversity.  Anthropogenic activities, however, have led to considerable recent ecological change (Ellis & Haff 2009).  Thus, this plant diversity is at great risk as the Mediterranean figures amongst the most globally threatened biomes, lacks sufficient protected areas and is rapidly losing habitats (Olson & Dinerstein 2002; Hoekstra et al. 2005).

Developing countries such as Algeria, despite harbouring high levels of diversity and endemism, often lack the required financial and technical resources to tackle the current biodiversity crisis (Pleguezuelos et al. 2004; Lee & Jetz 2008).  Therefore, accounting for the incomplete literature on the extinction risk affecting the flora of Algeria, and in the context of limited resources, prioritising the study and conservation of narrow plant endemics is a logical choice as they are habitually the most threatened and can often be used to highlight the issues affecting the wider flora and their habitats (Caro 2010; Yahi & Benhouhou 2010).  Considering the criteria set for endemism and rarity (Yahi et al. 2012), Adenocarpus faurei meets the requirements of a trigger species, only known to historically occupy a territory under 10km2.  The aim of this study was to look for Adenocarpus faurei within the historically reported locality (Maire 1921; Quézel & Santa 1962–63) and investigate its possible current presence.

Adenocarpus faurei was described for the first time by Dr. René Maire (Fig. 1), from the valleys of Oued Sidi Khaled, southwest of the city of Tiaret in Algeria (35.36660N & 1.30000E) in woodland and scrub on siliceous mountains, at an altitude of around 1,100m.  It is a 0.4–1.3 m tall shrub with small ciliate leaves on the margins, short petioles and yellow flowers.  This highly localized plant was later validated and included in the work of Quézel & Santa (1962–63) despite having themselves failed in finding the type locality.  Consequently, they relied on the herbarium specimens collected by the great French herbalist Alphonce Faure (1865–1958). 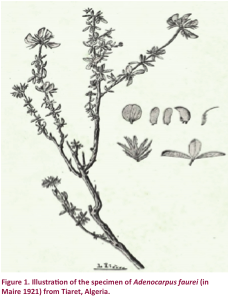 Adenocarpus faurei benefits from legal protection in Algeria (Decree 93-285 of November 21, 1993) and appears in reference literature.  It is mentioned in the Flora of Algeria (Quézel & Santa 1962–63) as very rare strict endemic species and has been included in the IUCN Red List of Threatened Species as Endangered (Walter et al. 1998).  Adenocarpus faurei , however, has not been seen or reported since 1926, when it was first described.  The few studies carried out in the Tiaret region after 1962 (e.g., Dahmani 1997) do not report any sighting.  Our previous floristic research conducted on the flora and vegetation of the Tiaret region, which started in 2009 (Miara 2011, 2017; Miara et al. 2012), did not record the taxon in any of our sampled plots either.  The lack of apparent information validating the existence of the only known historical population and the current conservation challenges that the Tiaret region is facing reinforced the relevance of this study.  Since the independence of Algeria in 1962, the valley of Oued Sidi Khaled that was wooded in many areas, has since been heavily urbanised.  The lack of coherence and regulations in many parts of Algeria regarding building new property has led to the destruction of many natural and forested areas (Louni 1994).  Added to this, the potential extinction of this narrow endemic would represent an irreplaceable loss for our biological heritage, and thus further justified field prospecting in view of proposing measures to save it from the verge of extinction if not too late.  Thus, the aim of this study was to find this plant in the wild, despite the unfavourable circumstances.

Adenocarpus faurei was originally reported in the northern part of Tiaret region (Fig. 2).  This region is part of the Tiareti-Tlemcenien Atlasic District (O3) that contains 94 endemic species, of which 41 are strict Algerian, 46 Algerio-Moroccan and seven Algerio-Tunisian endemics (Meddour 2010).  This mountainous region is largely covered by forest and pre-forest groups of Green Oak (Quercus ilex L.) and Aleppo Pine (Pinus halepensis Mill. S.l.), and includes several local endemic plants (Miara 2016).  Some of these endemics have a very restricted distribution, such as Otocarpus virgatus Durieu (Miara et al. 2014).  These plants’ populations remain relatively unknown since their description by French botanists during colonial times.  Among them, Adenocarpus faurei is described and reported only in the Sidi Khaled Valley at Tiaret.  This very localized area (less than 10km2) on the heights of the city of Tiaret is now surrounded by buildings and other urban infrastructure. 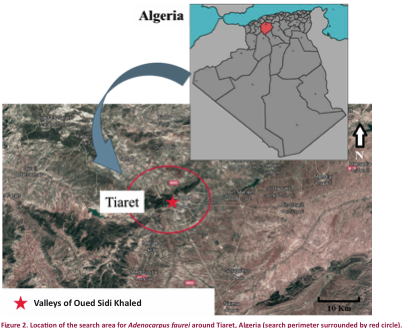 The study site was defined over an area of 20km2 around the approximate point where the plant was described comprised of 1km2 grid units to cover all the forest area of the mounts of Tiaret (Massif of Guezoul).  In each of the grid units, a systematic sampling method according to Gounot (1969) was followed; this method allows to completely scan the perimeter of investigation in order to find the target species.  Urban regions were not explored, except for those closest to the description site.  The research was executed by regular field trips throughout the year, intensified during the flowering period of the plant (June-July) during five successive years (2012–2017).

This survey was not successful in finding Adenocarpus faurei.  Since the region remains highly influenced by human activities, with the extension of habitations, intensive grazing and pollution being of major concern the observed threats reinforces the hypothesis of possible extinction for this plant,.  This research therefore highlighted the high probable extinction of Adenocarpus faurei.  According to IUCN (2012), a taxon is presumed extinct when comprehensive studies in known and/or presumed habitat are conducted at appropriate times and throughout its historical range and did not record the presence of a single individual.  Our study conforms to all these conditions, qualifying this taxon as presumed extinct.

According to IUCN data (Walter et al. 1998), Algeria has no extinct taxa but rather 141 threatened taxa (31 endangered, 22 vulnerable, 80 rare and 8 indeterminate).  This does not necessarily mean that plants are better protected in Algeria compared to other neighbouring or Mediterranean countries, rather, it seems that the lack of floristic research since independence in 1962 has limited our ability to accurately determine the conservation status of our flora.  In Morocco, one species is reported extinct (Trifolium acutiflorum Murb.) and in Egypt, two taxa are considered extinct (Fagonia taeckholmiana Hadidi and Tephrosia kassasi Boulos).  The countries of Mediterranean Europe have more data on extinct taxa (Turkey: 10 taxa, France: 7 taxa, Greece: 6 taxa, Italy: 2 taxa, Spain: 2 taxa).

The extinction of Adenocarpus faurei represents a great loss for biodiversity and especially that of Algeria.  This plant, which has great biological and patrimonial value for the country, could have benefited from in situ and ex situ conservation programs.  The defining characteristics of narrow endemics combined with the challenges they face in the Mediterranean region renders them particularly vulnerable.  Research on these endemic, rare and localized plants is deficient and their conservation status, or even their existence, is not well known.  In Algeria and the neighbouring countries of northern Africa, several similar species may be extinct in areas that are poorly protected or even neglected by responsible authorities.

The most likely extinction factor for Adenocarpus faurei Maire is the human activities primarily related to urbanisation such as increased building and cultivated surfaces.  These results present a reminder for the need for novel and up-to-date field data when generating conservation assessments of the rare and endemic plants of Algeria and elsewhere.  The protection of their natural habitats remains a priority.  These natural habitats, however, are still poorly known and studies to determine IPAs (Important Plant Areas) in Algeria are to be carried out.

Greuter, W. (1991). Botanical diversity, endemism, rarity, and extinction in the Mediterranean area: an analysis based on the published volumes of med-checklist. Botanical Chronicles 10: 63–79.