Contribution to the Macromycetes of West Bengal, India: 23–27

Copyright: © Bera et al. 2018. Creative Commons Attribution 4.0 International License. JoTT allows unrestricted use of this article in any medium, reproduction and distribution by providing adequate credit to the authors and the source of publication.

Funding: The Department of Environment, Government of West Bengal, India.

Five jelly fungi were collected from different corners of West Bengal, India, and are reported herein with detailed morpho-taxonomic details.

The state of West Bengal has a wide range of phytogeographic regions extending from the coastal areas (of Bay of Bengal) to the subalpine regions of the eastern Himalaya.  Each of these regions is unique in terms of various ecological conditions such as temperature, humidity, salinity, rainfall, altitude, edaphic factors, etc. that provide a wide range of habitats for the luxuriant growth of different types of macromycetes.

The specimens were collected during field trips in monsoon seasons (2010–2017) from corners of West Bengal, India.  Macro-morphological and ecological features of each collection were noted in the field and subsequently photographed.  The colour codes and terms used were in accordance with Kornerup & Wanscher (1978).  Microscopic features were obtained from freehand sections of dried specimens by mounting with 10% KOH, Congo red and Melzerʹs reagent with the help of Carl Zeiss AX10 Imager A1 phase contrast microscope.  Measurements of 30 basidiospores of each of the specimens were examined.  Q value denotes length/breadth ratios of basidiospores and the mean value is underlined.  Identification was done with the help of standard literature (Speairs 1957; McNabb 1965; Ellis & Ellis 1990; Zhishu et al. 1993; Kuo 2006, 2007, 2008a,b; Pippola & Kotiranta 2008; Shirouzu et al. 2009).  The voucher specimens were deposited in the Calcutta University Herbarium (CUH).

Habit and habitat: Caespitose, gregarious or arranged in rows, on dead and decayed dicotyledonous woods.

Remarks: Dacryopinax spathularia is well characterised by its spathulate fruit body coloured yellow-orange; presence of thick-walled, cylindrical marginal hyphae; absence of inflated vesicles and hyphal pegs in the abhymenium; and presence of 0–1 septate basidiospores (McNabb 1965; Shirouzu et al. 2009).  This is a widely distributed taxon and previously been reported from Japan, North America, and China etc. (McNabb 1965; Zhishu et al. 1993; Shirouzu et al. 2009).  It was reported from Rajamunda, Odisha, growing on logs of Shorea robusta (Tiwari et al. 2013).  The species was also recorded on wood from Saharanpur, Uttar Pradesh (Butler & Bisby 1931).  The present collection matches well with the description made from North America (McNabb 1965); however, according to Shirouzu et al. (2009), basidiospores of the specimen from Japan were found to be sub-globose to reniform, while the Indian specimen showed mostly cylindrical basidiospores with the range varying from oblong to bacilliform (Q=1.6–3.0).  The specimen reported from China was found to have 1–2 septate basidiospores at maturity, but the basidiospores of our collection showed one septation at maturity. 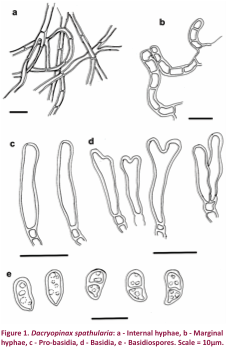 Habit and habitat: Gregarious to confluent, growing on dead and decayed dicotyledonous woods.

Remarks: Characteristic features of Exidia glandulosa includes the presence of brown to black turbinate, gelatinous fruit bodies that often coalescing together to form masses, dotted by minute glandular structures, cruciate septate, stalked basidia and allantoid basidiospores.  The Indian collection nicely matches with the description of Ellis & Ellis (1990); however, the habitat of our collection was other dead dicotyledonous wood as compared to the Britain collection that was reported to be oak and hazel.  It was reported from Nilgiris, Tamil Nadu (Montagne 1842).  Among morphologically similar taxa: Exidia plana differs by its effused fruit body (Roberts 2001) that lacks dot-like glands on its surface.  Exidia truncata Fr. has fruit bodies that are not confluent and remain largely free from the substrate, and larger basidiospores (14–22 × 5–7 µm; Ellis & Ellis 1990).  Exidia saccharina differs in having caramel to dark brown fruit bodies lying flat on the substrate (Ellis & Ellis 1990).  Exidia recisa differs by its amber to dark brown coloured fruit bodies that are not confluent and becomes flabby and drooping when old (Ellis & Ellis 1990). 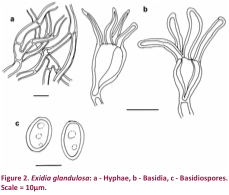 Habit and habitat: Solitary to scattered, on humus mixed soil.

Remarks: The presence of characters like a glossy, fan-shaped, gelatinous pileus with the lower (hymenial) fertile surface covered with dense, white soft teeth or spines can easily identify Pseudohydnum gelatinosum in the field (Ellis & Ellis 1990).  It is distinct from other taxa in being the only toothed member of the jelly fungi (Emberger 2008).

Pseudohydnum gelatinosum has been previously reported from India (Das 2009).  The present collection shows little smaller cap (14–28 mm vs. 40–90 mm) and larger basidiospores (5–9 × 5–7.5 µm vs. 5–6 × 4–5.5 µm).  Apparently, Dacryopinax elegans resembles the present taxon with regard to colour, structure, and texture but is easily distinguished from it when the lower part of pileus is examined (Kuo 2015). 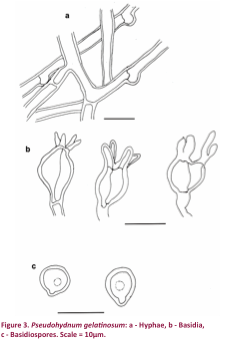 Habit and habitat: Solitary, on dead and decayed dicotyledonous wood.

Remarks: Tremella fuciformis is characterised by its pure white, translucent, gelatinous fruit bodies with lobed margins, and the presence of cruciate-septate phragmobasidia (Speairs 1957).  It has previously been reported from several countries such as China, Brazil, and North America (Burt 1921; Olive et al. 1948; Speairs 1957; Zhishu et al. 1993).  The Chinese specimen differs from the present collection in having slightly smaller basidiospore (5–7 µm diam.); however, the present specimen was found to be identical to the description made from Brazil and North America (Burt 1921; Olive et al. 1948; Speairs 1957).  From India it was reported growing on logs of Shorea robusta from West Bengal (Banerjee 1947) and Jagdalpur, Chhattisgarh; on Pterocarpus marsupium and from Keshkalghat, Chhattisgarh (Tiwari et al. 2013).

Tremella fuciformis is morphologically similar to T. reticulata; however, T. reticulata grows on the ground or on very rotten stumps and it differs by having a larger (up to 80mm long and 150mm broad), erect, reticulated fruit body that is irregularly forked upwards giving rise to tapered tips (Speairs 1957; Kuo 2008a). 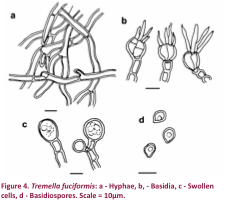 Habit and habitat: Solitary to caespitose, on dead and decayed dicotyledonous wood.

Remarks: Distinguishing features of Tremella mesenterica includes a bright yellow, lobed, cerebriform fruit body, presence of cruciate septate phragmobasidia with much longer sterigmata (Ellis & Ellis 1990; Pippola & Kotiranta 2008).  The specimen of our collection is similar in characters with the one described from Finland (Pippola & Kotiranta 2008) except having slightly longer sterigmata and presence of distinct oil droplets in basidia and sterigmata.  From India, it was reported from Jagdalpur, Chhattisgarh, growing on logs of Shorea robusta (Tiwari et al. 2013). 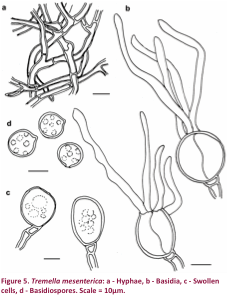 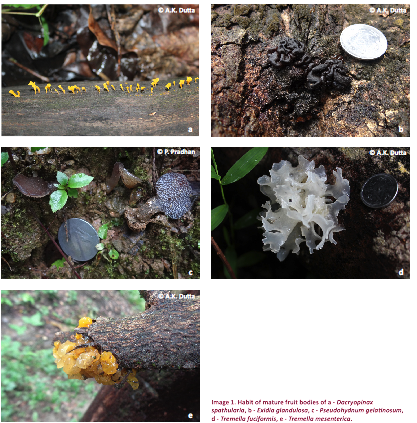