New records of bats (Mammalia: Chiroptera) from Assam, northeastern India with a distribution list of bat fauna of the state

Abstract: Specimen based records of two vespertilionid bats namely Pipistrellus ceylonicus and Tylonycteris fulvida are provided for the first time from the state of Assam in northeastern India.  Based on review of existing literature and examinations of museum specimens, we also furnish a checklist of the bat fauna of Assam with distribution, which includes 32 species in 17 genera.

Copyright: © Boro et al. 2018. Creative Commons Attribution 4.0 International License. JoTT allows unrestricted use of this article in any medium, reproduction and distribution by providing adequate credit to the authors and the source of publication.

The northeastern region of India exhibits exceptional mammalian richness including over 70 bat species some of which have been described or reported only recently (Sinha 1999; Bates & Harrison 1997; Thabah & Bates 2002; Ruedi et al. 2012a,b; Saikia et al. 2017; Thong et al. 2018).  Although there is no consolidated account on the bat fauna of Assam, bat diversity of the state is apparently not very high comprising around 30 recorded species (Bates & Harrison 1997; Sinha 1999; Boro et al. 2013; Boro & Saikia 2015).  But considering the lack of field studies for documenting the diversity, distribution and status of the bat fauna of the state, the reported species richness in the region would be undoubtedly an underestimate.  In the pre independence period (before 1947), most of the small mammalian collections in the erstwhile Assam were made outside the present political boundary of Assam State, i.e., Khasi Hills (Meghalaya), Lushai Hills (Mizoram) and the Daffla and Mishmi Hills (Arunachal Pradesh).  During the Mammal Survey conducted by Bombay Natural History Society (1911–1923), however, some areas of eastern and western Assam were surveyed.  The report of the above survey recorded 15 species of bats from the current political boundary of the state (Hinton & Lindsay 1926).  In the subsequent period, very little information was generated on diversity and distribution of the bat fauna of Assam except for Kurup (1968) and Sinha (1999), the former dealing with the mammalian fauna of Assam as a whole and the latter providing a consolidated account of the bats of northeastern India.  Twenty-eight species of bats from Assam find mention in the monographic work of Bates & Harrison (1997).  Of late, a few species have been added to the bat fauna of Assam (Boro et al. 2013; Boro & Saikia 2015).  But no up to date checklist of the bat fauna of Assam exists till date. In this communication, we provide specimen-based records of two species from Assam, namely Pipistrellus ceylonicus (Kelaart) and Tylonycteris fulvida (Blyth), which represent additions to the bat fauna of the state. Additionally, we also furnish a checklist of the bats of the state with recorded localities. Our compiled checklist includes 34 species from 17 genera (Table 2), which is primarily derived from published information supplemented by specimens deposited at Zoological Survey of India, Shillong (ZSIS).

Adult specimens of Pipistrellus ceylonicus and Tylonycteris fulvida from two localities in Assam were collected (Fig. 1).  The specimens were humanely euthanized with chloroform vapour and preserved in 70% alcohol and integrated in the collection of ZSIS.  Standard morphological measurements of the specimens and craniodental measurements of the extracted skulls were taken using a digital caliper accurate to the nearest 0.1mm and 0.01mm respectively and were identified following Bates & Harrison (1997).  For the checklist, information is primarily based on published literature including the Chiroptera catalogue of Zoological Survey of India, Kolkata (Ghosh 2008).  The chiropteran collection from Assam in ZSIS was also examined and the information incorporated which was supplemented by author’s field observations in various parts of western Assam between August 2012 and September 2017.  In view of recent taxonomic revisions and species delimitations (Benda & Gaisler 2015), published records of palearctic species like Pipistrellus pipistrellus, Pipistrellus kuhlii from Assam are omitted from the present account. 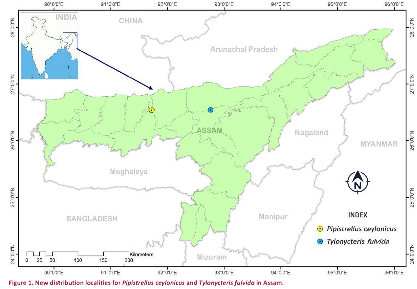 During field work around the periphery of Burachapari Wildlife Sanctuary in Sonitpur District of Central Assam, an adult male specimen of P. ceylonicus was caught at Sisuwati Village (26.544380N & 92.764130E, 50m) at the southern edge of the Sanctuary at 16.40hr on 28 November 2016.  The village is situated on the sandy riverbank of Brahmaputra with scattered human settlements. The individual was captured while flying inside a school building by sweeping a butterfly net.  Although we could not ascertain the roosting location of the bat, secondary sources informed that a colony of bats roosts on the ceiling of an occasionally used community health centre building nearby.

The Kelaart’s Pipistrelle Pipistrellus ceylonicus (Kelaart, 1852) is a widely distributed species in South Asia, Southeast Asia and China (Bates et al. 2008a).  In India, this bat is known from the states of Andhra Pradesh, Bihar, Goa, Gujarat, Jharkhand, Karnataka, Kerala, Madhya Pradesh, Maharashtra, Odisha, Rajasthan, Tamil Nadu and West Bengal (Bates et al. 2008a).  The International Union for Conservation of Nature (IUCN) categorizes this species as Least Concern (Bates et al. 2008a).  This species has recently been recorded from Umlyngsha area (25.207830N & 92.262160E) of East Jaintia Hills in Meghalaya State (Saikia et al. in press).  Thus, the present record of this species from Assam is the second report of this species from northeastern India and it is quite likely that the species is more widely distributed in India than previously documented.

Description of the specimen

The live specimen had a golden yellow pelage around the anterior part of the dorsum (Image 1).  The posterior region especially around the flanks was chocolate brown.  The ventral pelage was golden yellow, individual hairs had a yellowish tip and darker roots.  The bright golden colour of the specimen may indicate its advanced age as noted by Philips (1980) who stated that older individuals tend to assume a more reddish or golden hue.  Muzzle, ears and interfemoral membranes were dark brown.  The ears are triangular in profile with roundish tips.  Tragus is curved and blunt and the muzzle is naked. Compared to the size of the individual, the penis is long (shaft length of 8.25mm).  The interfemoral membranes join to the base of the phalanges.The animal weighed 6.5g.  The animal was registered in the collection of ZSIS under the registration number V/M/ERS/382.

The skull is robust with a condylocanine length of 13mm (Table 1), and the dorsal profile is slightly convex in the anterior region.  The zygomata, however, are comparatively thin and flared outward.  The supraorbital ridge is well defined. The dentition of the individual is significantly worn out; especially the canines whose tip is almost at the level of the posterior premolar indicating its old age.  Mastication over the lifespan of an individual continually wears down tooth surfaces and as a result, cheek teeth become short as cusps are worn down, canines become short and dull, and the width of the tip increases (Brunet-Rossinni & Wilkinson 2009).  The first upper premolar (pm2) is prominent and its crown area is almost equal to that of the first upper incisor (i2).  This is in contrast to similar sized species like Hypsugo anthonyi, H. joffrei, Pipistrellus cadornae and Arielulus circumdatus, which have diminutive first upper premolar (Pearch & Writer 2009).

Two adult individuals of Club-footed Bat Tylonycteris fulvida were caught in the evening of 24 July 2017, by mist netting inside a bamboo grove at Balahati Village (26.535550N & 91.718610E, 60m) of Baksa District in western Assam.  The bamboo grove (Bambusa balcooa) is surrounded by agricultural fields on all sides. It may be mentioned that on an earlier occasion in July, 2013 we found 14 pups of this bat along with a single female roosting inside the intermodal space of a bamboo cut from the same bamboo grove.  The female was observed trying to enfold the pups with the wings and was reluctant to fly away and was later released on the same spot.  On several earlier occasions, this bamboo patch was visited and flight and roosting activity of this bamboo bat was noted only during the wet season especially between June–August.

Although hitherto not recorded in Assam, Tylonycteris fulvida (as T. pachypus) has been reported from a few localities in Manipur, Meghalaya and Mizoram, Sikkim and Tripura states of northeastern India (Molur et al. 2002).  In view of its widespread distribution in China, South and Southeast Asia, the IUCN Red List of Threatened Species categorizes it as a Least Concern species (Bates et al. 2008b). 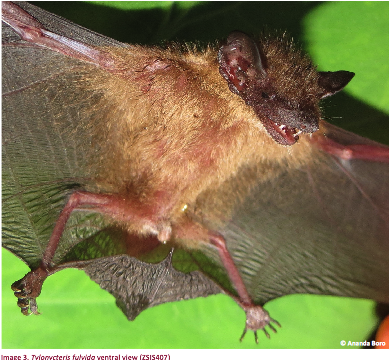 Description of the specimens

The two captured specimens of T. fulvida were golden brown dorsally except for the muzzle which was darker while the ventral pelage was little paler (Images 2 &3).  The muzzle and ears were dark brown.  The wing membranes were dark brown and hairless. The dorsal pelage is thick and short, however, it is not so dense in the venter.  They are uniformly coloured throughout the length.  The typically flattened head and the whitish thumb pads is very discernible.  The feet are small and the wing membrane attaches to the base of the metatarsus and around the middle of the roundish thumb pad.

The skull is very broad and flattened which possibly developed in these bats as an adaptation to facilitate entry and exit through small fissures in bamboos.  In fact, the cleft in the bamboo from where these individuals were caught was barely 5mm wide.  The nasal notch does not extend posteriorly to the level of infraorbital foramina and the supraorbital process is poorly developed, which are distinguishing characteristics of T. fulvida (=T. pachypus) (Bates & Harrison 1997).  The craniodental measurements (Table 1) fit well to the mensural data reported in Bates & Harrison (1997).  The specimens were deposited in the collection ZSIS under registration numbers V/M/ERS/407 and 408

Table 2. Checklist of bat fauna of Assam comprising 32 species in seventeen genera with recorded distribution localities in the state.

Chaturvedi, Y. (1969). Two new records of bats from Assam and Andaman Islands. Labdev Journal of Science and Technology India 7B: 74–75.

Ruedi, M., J. Biswas, O. Chachula & T. Arbenz (2012b). A winter survey of bats from the Jaintia Hills with a synopsis of their diversity in Meghalaya, pp. 87–105. In: Arbenz T. (ed.). Cave Pearls of Meghalaya. Vol I - Pala Range and Kopili Valley. Abode of Cloud project, Switzerland.