On the birds of Marivan County, western Iran: an update

Abstract: To update the avian checklist and note their conservation status in Marivan County, western Iran, we report the addition of 28 species belonging to six orders and 13 families recorded during our field observations in 2015–2017 outside the range of Zarivar Wildlife Refuge.  With 255 species reported in previous surveys from the Zarivar Wildlife Refuge and Marivan County, as well as 28 additions here, the avian checklist of Marivan County reaches 283 species from 19 orders and 57 families, which is equivalent to about 51.2% of total bird species recorded from Iran.  Appendix I of the Convention on International Trade in Endangered Species applies to five species and the Appendix II applies to 34 species.  The Red List considers six species as Vulnerable, three species as Endangered and 11 species as Near Threatened.  In addition, 15 species are endangered and another 43 species are protected species based on the rules and regularities/laws of the Iranian Department of the Environment.

Copyright: © Zarei et al. 2018. Creative Commons Attribution 4.0 International License. JoTT allows unrestricted use of this article in any medium, reproduction and distribution by providing adequate credit to the authors and the source of publication.

Reviewing the avifaunal studies in Iran conducted during the past century indicates large regional differences in the number and quality of studies.  While the bird fauna of the northwestern, northeastern, southern Caspian and southern Iranian provinces has been well covered in these studies, avifaunal studies in the western provinces such as Kurdistan Province have been very weak (Roselaar & Aliabadian 2007; Khaleghizadeh et al. 2011).

Until recently, no study has been published on the bird fauna of Kurdistan Province and the surveys conducted in neighboring provinces also did not cover its avifauna.  In a recent study by Zarei et al. (2017), as the first avifaunal study from Kurdistan Province, planned and implemented in Zarivar Wildlife Refuge (ZWR), a total number of 222 bird species including 131 terrestrial birds (59%) and 91 waterbirds (41%) belonging to 16 orders and 50 families were identified, of which 95 species were new records for ZWR.  Of 222 species, seven species were endangered and 30 species were protected species based on the rules and regulations/laws of the Iranian Department of the Environment (DOE; https://doe.ir/) (Supreme Council on Environment 2017).  Twenty-one species were listed in the Appendix I and II of the Convention on International Trade in Endangered Species (CITES; https://cites.org/), and 11 species were in the Red List of Threatened Species (BirdLife International 2017).

Herein, to update our current knowledge on the avifaunal checklist and their conservation status in the range of Marivan County (west of Kurdistan Province), we report the addition of 28 new bird species belonging to six orders and 13 families recorded outside the range of ZWR during field observations in 2015–2017.

Our study area in Marivan County, is one of the unique landscapes in the middle of Zagros Mountains. Its area is 7,275km2 and it lies between 35.163581–36.0918030N & 46.030133–46.7598250E  in the west of Kurdistan Province, Iran.  The map of the study area was produced using Global Mapper 18 (Global Mapper Software LLC, Olathe, Kansas) and Surfer 11 (Golden Software, LLC) (Image 1).  It is placed in the middle of the Irano-Anatolian biodiversity hotspot and includes a variety of mountainous habitats prevailed with Persian oak forests, numerous artificial and natural water bodies and meadows with cold Mediterranean climate (Rastegar-Pouyani et al. 2009).  ZWR (35.5453030N & 46.1233220E), located in the east of the study area with an area of 3,291ha, is an Important Bird Area (Evans 1994) and a wetland with international importance in the Middle East (Scott 1995) (Image 2). 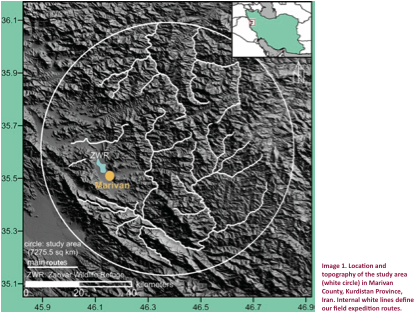 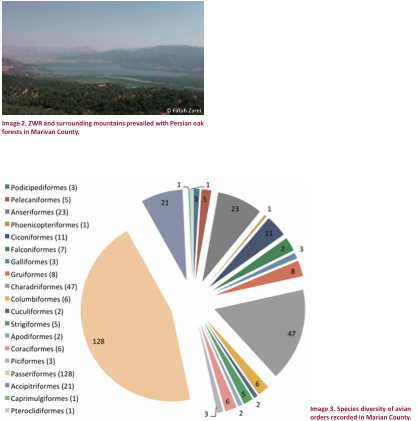 Considering 222 bird species recorded in ZWR by Zarei et al. (2017), 33 bird species recorded by previous authors in the ZWR and Marivan County (reviewed in Zarei et al. 2017; Scott 2008), as well as 28 new additions recorded here, the current study increases the avifaunal checklist of Marivan County to 283 species belonging to 19 orders (Image 3) and 57 families, which is equivalent to about 51.2% of total bird species recorded in the country (551 species until August 2017; Khaleghizadeh et al. 2017).  Of 283 species, Appendix I of the CITES applies to five species, while it’s Appendix II applies to 34 species. The IUCN Red List of Threatened Species considered six species as Vulnerable (VU), three species as EN and 11 species as NT (BirdLife International 2017).  Finally, 15 species are endangered and another 43 species are protected species in the Iranian DOE laws (Supreme Council on Environment 2017).  Therefore, the number of species with the conservation value in Marivan County would increase to 67, indicating the high conservation value of the area.

In addition to the considerable importance of ZWR as an IBA in the Middle East (Scott 1995), the remarkable avian diversity of the Marivan County may stem from several ecological factors, as follows:

Complex physiography and rich flora of Kurdistan Province (consists of 2,110 species from 113 families and 629 genera, which is equivalent to about 25% of plant species recorded throughout the country; Maroufi 2012) as part of the Iranian-Anatolian biodiversity hotspot, and a variety of mountainous habitats with Persian Oak forests and meadows with cold Mediterranean climate (Rastegar-Pouyani et al. 2009), has provided a variety of ecological niches for various avian species.

In term of zoogeography, the study area is on the crossroads of fauna originating from the Palearctic, Oriental and Afrotropical realms (Scott 1989; Roselaar & Aliabadian 2007).  As part of the Zagros Mountains, this area acts as a secondary and hybrid contact zone for a considerable number of bird taxa including Passeriformes from the west and east of Palearctic and from the great Saharo-Sindin desert belt (Aliabadian et al. 2007).

It seems that with increasing drought of the Lake Urmia in the north as an example, the existence of wetlands and water bodies located at lower latitudes (including the ZWR and water bodies of Marivan County) has significantly increased their importance for staging and wintering areas of migratory water birds in the African-western Eurasian flyway (Sheykhi Ilanloo et al. 2015; Zarei et al. 2017).

The bird fauna in the world is facing several common threats mainly due to anthropogenic activities/human-induced disturbances.  According to Worldwatch Institute, many bird populations are currently declining worldwide.  Habitat loss, overhunting, pollution, accidental mortality due to structural collisions, long-line fishing bycatch, competition and predation by pet cats, oil spills and pesticide use and also climate change are the main threats affecting birds in the world including Iran.  Although, some forms of legal protection, have already been instituted, along with education of local people by the Iranian DOE, nongovernmental organizations (NGOs), and media initiatives; we think that habitat monitoring is urgent for investigating the population status.  Moreover, gaining basic information about their natural history, community structure, and the biodiversity of regional systems including genetic diversity is highly recommended.

Esmaeili, H.R., A. Gholamifard & J. Freyhof (2011). Ichthyofauna of Zarivar Lake (Iran) with the first records of Hemiculter leucisculus and Alburnus hohenackeri in the Tigris drainage. Electronic Journal of Ichthyology 7(1): 1–6.

Imanpour-Namin, J., Z. Mohammadi & Y. Mohammadi (2015). Check the invasion of non-native fish in the Zarivar Lake and its effects on native fishes. In: The 1st National Conference on the Protection and Restoration of Wetlands with Emphasis on the Zarivar Lake. Islamic Azad University, Sanandaj, Iran.

Supreme Council on Environment (2017). Species of wild animals subjected to hunting and fishing, and their classification. http://www.doe.ir/Portal/Home/Default.aspx. Downloaded on 19 August 2017.