Extension in its distribution range and a new record for the cicada genus Salvazana Distant, 1913 (Hemiptera: Cicadidae: Cryptotympanii) from India

Abstract: The cicada genus Salvazana Distant, 1913 is reported for the first time from India with the discovery of Salvazana mirabilis mirabilis Boulard, 2002 from Shillong in the northeastern state of Meghalaya in India.  This extends the northwestern distributional range of the genus Salvazana by more than a thousand kilometers.  Brief descriptions of the specimen along with photographs of various structures are provided.

Copyright: © Hajong & Thangkiew 2018. Creative Commons Attribution 4.0 International License. JoTT allows unrestricted use of this article in any medium, reproduction and distribution by providing adequate credit to the authors and the source of publication.

Acknowledgements: We thank the Head, Department of Zoology, North-Eastern Hill University, Shillong for providing research facilities.  We acknowledge the Meghalaya Basin Development Authority (MBDA), Shillong for supporting our work; we are also grateful to the Chief Conservator of Forest/Chief Wildlife warden, Government of Meghalaya for granting collection permit (Memo No. FWC/G/173/Pt-III/318-27).

Distant (1913) describes the distributional range of S. m. mirabilis as Indo-China; however, there exists no record of its occurrence in India and neighbouring countries including Bhutan, Bangladesh, Nepal, Sri Lanka and Myanmar.  In a comprehensive account of cicada from this region, Price et al. (2016) compiled and provided an annotated catalogue of cicadas of the Indian region, consisting of India, Bhutan, Bangladesh, Nepal, Sri Lanka including Myanmar; based on literature and type specimens in the collection of the British and other museums they have listed a total of 281 species of cicadas, with 189 species from India and Bangladesh, 19 species from Bhutan, 81 species from Myanmar, 46 species from Nepal and 22 species from Sri Lanka.  An earlier detailed analysis of cicadas from Nepal by Sanborn (2015) had listed 59 species and Bhutan with 18 species and the Himalayan state of Sikkim in India lists 43 species.  These lists also clearly indicate the absence of any historical records or specimens of the genus Salvazana from the Indian region.  A comprehensive account of cicada fauna from the state of Meghalaya in northeastern India listed a total of 19 species based on the voucher specimen at the collection of Zoological Survey of India (Sen et al. 1998).  His list also shows an absence of any representative member from the genus Salvazana. Presently, the known distribution of S.m. mirabilis extends through Laos (Boulard 1999; Lee 2014), Thailand (Boulard 2002), Vietnam (Lee 2008; Pham & Yang 2009) and China (He 1984).  Similarly, S.m. imperalis is distributed in Laos (Distant 1918), China (He 1984; Chou et al. 1997) and Thailand (Boulard 2007).  Thus, both these subspecies appear to occur sympatrically in these localities, but no reports exist of its occurrence in the north-west towards Myanmar.  Here we present the first record of a subspecies of Salvazana from the northeastern part of India extending its distributional range northwestward into northeastern India.

The present specimen was collected during our continuing studies on the cicada diversity from the biodiversity rich northeastern Indian state of Meghalaya.

For survey of cicada fauna we generally follow forest trails and locate the male cicadas by their calls. We also attempt to locate the female individuals within the vicinity of the calling males.   After spotting them we use long handled insect collecting nets (Rescholar  model  No. R.I 69-05) for capturing them.  GPS coordinates are recorded with the help of a Garmin (eTrex) receiver.  Captured specimens in the field were immediately put in plastic specimen containers.  The present specimen was collected from a forested patch in Umiam area (Barapani) (25.664888890N & 91.898611110E) of Ri-bhoi District in Meghalaya.  The collected specimen was brought to the lab and the wings were extended on a spreading board.  The specimen was then dried completely in an oven at around 400C for 48 hours.  Male genitalia were examined in situ with a Motic SMZ 168 stereo zoom microscope.  Habitus photo of the dried and pinned specimen was taken with an Olympus DSLR; pygofer structure was taken with Olympus 150mm lens fitted with macro extension tubes. Measurements were made with a digital Vernier caliper.  Tissues sample (left mid legs) was preserved in DNA grade ethanol for future molecular analysis. Voucher number (07616/RB) was assigned to the specimen and was deposited in the Entomological Research collection of Entomology laboratory, Department of Zoology, North-Eastern Hill University, Shillong, Meghalaya, India.

The specimen was identified based on a description by Distant (1913) and specimen picture of S.m. mirabilis available from the website cicadamania (http://www.cicadamania.com/pictures/main.php?g2_itemId=1290).  The diagnosis and brief description of the specimen along with measurements are provided; the terminology used in the description is based on Moulds (2005).

Diagnosis: Head much narrower than base of the mesonotum; transversely truncated between the eyes; length almost half the breadth between eyes.  Pronotum shorter than mesonotum with lateral margins oblique and sinuate.  Abdomen broad and robust with tympanal opening completely covered; rostrum nearly reaching posterior coxae.  Metasternum raised in middle and bearing backward directed posterior process.  Operculum not passing base of abdomen.  Tegmina basal third opaque rest partly sub hyaline; longer than greatest breath; apical areas eight.  Wings about half the length of tegmina. 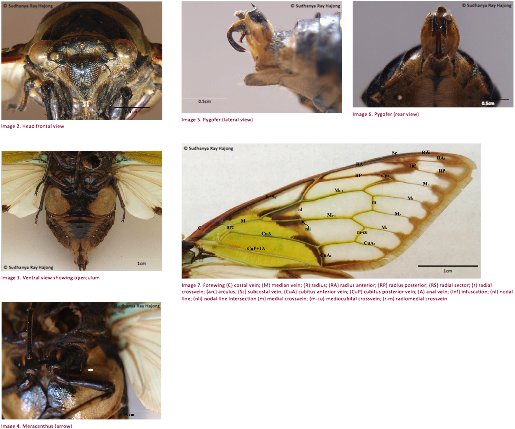 Based on the distribution records both subspecies appear to occur sympatrically in China, Thailand, Vietnam and Laos.  The present record of S.m. mirabilis is the only record of the Genus Salvazana from India.  It is also not known whether its sister subspecies S.m. imperialis also occurs in this region, as no reports exist, it is however possible that S. m. imperialis also exists sympatrically in the reported area and further field surveys in the near future would likely reveal its occurrence.  The present specimen of S.m. mirabilis was collected from an area called Umiam, which is around 20km northeast of Shillong the state capital of the state of Meghalaya.  It is located at an altitude ranging from 1,000–1,100 m, and has a mixed vegetation consisting mainly of pine trees.  The major pine species belong to Pinus kesiya var. kesiya which grow to a height of some 10–20 m and thus may constitute an important canopy habitat for this large cicada.

In terms of diversity of cicadas Southeast Asia is considered as a hotspot and one of the centers for cicada diversification.  Many fauna of this region can be traced in terms of their biogeography by means of their westward dispersal towards Myanmar and into northeastern India and finally further southwards towards peninsular India (Mani 1974).  Several cicadas biogeographically show such a dispersal and range extension farther westward from Thailand, Myanmar, northeastern part of India to peninsular India.  For instance the cicada genus Chremistica which is mainly distributed in Southeast Asia and Sundaland has an extension till the Western Ghats of India and Sri Lanka (Bregman 1985).  The genus Salvazana has so far had a distributional range covering China, Vietnam, Laos and Thailand.  The present record on the extension of its distributional range westward by more than a thousand kilometers to northeastern India can therefore also be understood in light of the fact that the northeastern part of India which was termed as the ‘eastern borderland’ by Mani (1974) biogeographically together constitutes what is presently known as the Indo-Chinese subregion.

Like many other cicadas, hardly anything is known about the natural history and the annual seasonal phenology of S. m. mirabilis from the northeastern part of India in particular, although some aspects of S. m. mirabilis is available from Thailand (Boulard 2007, 2013); however, here in Shillong they appear to emerge during the vernal season and appear to peak around the month of June–July.  They most likely prefer tall pine tree canopy for resting and also likely gather below the canopy layer of medium or high trees (Pham & Yang 2009).  With regards to the occurrence of the sister subspecies, S.m. imperialis from this region, it is expected that further fieldwork will be required to bring its ecology and biogeography to light.

He, J. (1984). Descriptions of two new genera and four new species of Cicadidae from China (Homoptera: Auchenorrhyncha). Contributions of the Shanghai Institute of Entomology 4: 221–228.