Copyright:  © Chanda 2018. Creative Commons Attribution 4.0 International License. JoTT allows unrestricted use of this article in any medium, reproduction and distribution by providing adequate credit to the authors and the source of publication.

Funding: There was no funding for the present work.

Acknowledgements: The author is thankful to the Director of Zoological Survey of India for awarding a research fellowship during which the study has been done.  The author is also thankful to Professor Tanmay Bhattacharya, Ex-Emeritus Professor of Zoology, Dept. of Zoology, Vidyasagar University, Midnapur, West Bengal for his valuable guidance and advice during the preparation of the manuscript.

Shrimps and prawns of various kinds have certainly been a source of protein for human consumption from very early times.  Within historical times reference is made to prawns in ancient Chinese and Japanese literature (Farfante & Kensley 1997).  In Indian literature, the earliest known penaeid prawn was Penaeus monodon, described by Fabricius in 1798.  In 1814, the Penaeoidea was recognized as a taxonomic group by Rafinesque-Schmaltz.  Since then, the literature on many aspects of the systematics and biology of this group has grown enormously because of their commercial importance.  Genus Penaeus is the actual mother genus of the present genus under study.  Genus Trachypenaeus was established by Alcock (1901) as a subgenus under genus Penaeus.  Further, Alcock (1905) raised Penaeus (Trachypenaeus) into its generic status.  Later, Burkenroad (1934) divided the genus Trachypenaeus Alcock, 1901 into two subgenera named Trachypenaeus (Trachypenaeus) and Trachypenaeus (Trachysalambria).  Farfante & Kensley (1997) revised the genus Trachypenaeus Alcock, 1901 and divided the genus into four genera such as Trachypenaeus sensu lato,

Trachysalambria Burkenroad, 1934 by rising the subgenus Trachypenaeus (Trachysalambria) into generic status, Megokris, Farfante & Kensley, 1997 and Rimapenaeus, Farfante and Kensley (1997).  After the work of Farfante & Kensley (1997), a comprehensive taxonomic study on the trachypenaeid group of prawns from Indian water has not been conducted, though some fragmented work has been done by some Indian researchers like Radhakrishnan (2012), but all of them are a checklist or review on existing literature or zoogeography.  Therefore, the main objectives of the present study are to prepare a comprehensive document and find out the actual faunal composition of the Trachypenaeid group of prawns found in Indian water.

The present study is mainly based on the specimens collected by the author from commercial trawler catch of different fish landing centres throughout the Indian coastline (Fig. 1).  In addition to this, penaeid prawns preserved in the National Collection of the Zoological Survey of India, Kolkata, India, Central Marine Fishery Research Institute, Cochin, Kerala and its regional stations at Mandapam, Tamil Nadu have been studied.

The materials preserved in rectified spirit (90%) and body parts of taxonomic importance have been dissected and studied under a stereoscopic binocular microscope.  The illustrations have been drawn with the aid of line drawings and by camera Lucida.  The detailed synonymies have been furnished to the genera and species and also their diagnosis, distribution, taxonomic remarks have been furnished.  The genera and species are arranged alphabetically for convenience.  In addition, an attempt has been made to include a comprehensive coverage of the literature in the reference section.  For all citations of taxon author’s name and year of publication have been given. 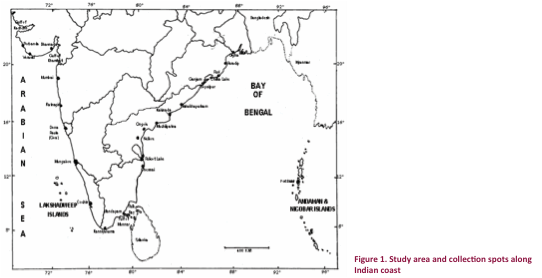 For the present study, trachypenaeid prawn refers to those species of penaeid prawns belonging to the genus Trachypenaeus Alcock, 1901, Trachysalambria Burkenroad, 1934, Megokris Farfante & Kensley, 1997, and Rimapenaeus Farfante & Kensley 1997 as they possess close similarity in their morphology and are created from the same genus Trachypenaeus.  In the present study, the author strongly recommends that due to the similarity between Trachypenaeus and Megokris, the latter has been considered as a junior synonym of the former (detail has been described in the discussion part).  Therefore, three valid genera namely Trachypenaeus, Trachysalambria and Rimapenaeus have been considered as trachypenaeid group of prawns. These three genera can be separated by the following key:

Key to the Indian genera of trachypenaeid prawn

Remarks: Present study reveals that Trachypenaeus is represented in India by three species, viz.: T. granulosus (Haswell, 1879), T. pescadoreensis (Schmitt, 1931a), and T. sedili (Hall, 1961).  These species can be separated by the following key.

Key to the species found in India

2  The anteromedian plate of the thelycum with a prominent longitudinal ridge, ending in a rounded projection not reaching posterior edge of the thelycum..T. pescadoreensis (Schmitt, 1931)

The species T. granulosus was described by Haswell (1879) from Australian water as Penaeus granulosus. Schmitt (1926) transferred the species to genus Trachypenaeus.  Muthu (1971) recorded the species from Kakinada, Andhra Pradesh, eastern coast of India for the first time from Indian water.

Diagnosis of the species: Body densely pubescent; rostrum dorsally armed with 9 to 11+1 teeth, reaching to distal part of antennular peduncle or a little beyond; hepatic and cervical sulcus indistinct, longitudinal suture short; abdomen with a small dorsal tubercle on second segment and a middorsal carina on the last four somites; telson armed with a pair of movable lateral spine; epipod present on third pereopod only; petasma with very broad distolateral projections, tips curving forward; distomedian projections small, curving ventrally. In females, anterior plate of thelycum flat, rounded distally with a posterior rounded projection which can be very prominent and is often fused to posterior plate; posterior plate excavated on either side of median convexity (Racek & Dall 1965).

Remarks: Present material is in agreement with the description and illustration of Farfante & Kensley (1997) except that the forwardly curved tip of dorsolateral projection of petasma does not have a tapering end, but is rather blunt (Fig. 3).

Schmitt (1931) described the species as Penaeus pescadoreensis from the Straits of Formosa.  The species has been recorded from India by Radhakrishnan et al. (2012) for the first time.

Material examined: During the present study no material was collected by the author and diagnosis has been given on the basis of literature.

Diagnosis of the species: Body densely pubescent; rostrum dorsally armed with 9+1 teeth, reaching to distal part of antennular peduncle, tip slightly curved upward; hepatic and cervical sulcus indistinct, longitudinal suture not prominent; abdomen with a small dorsal tubercle on second segment and a middorsal carina from half way of third segment and ended at posterior end of six with a small spiny tubercle; telson armed with a pair of movable lateral spine; epipod present on third pereopod only; petasma with very broad distolateral projections, tips curving forward and ending in a point; distomedian projections small, curving ventrally.  In females, anterior plate of thelycum with a prominent longitudinal ridge, ending in a rounded projection, not reaching the posterior margin of median plate. 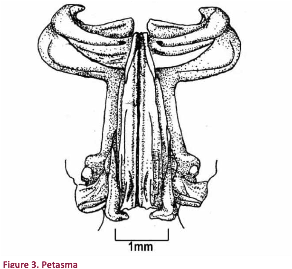 Hall (1961) described the species as Trachypenaeus sedili from Malayan water, De Bruin (1965) recorded it from Sri Lankan water extending the distribution westward to the Indian Ocean.  It was Thomas (1969), who recorded the species from the Coromandel Coast, east coast of India for the first time from Indian water.

Remarks: In Indian water only three species viz. T. aspera (Alcock, 1905) and T. curvirostris (Stimpson, 1860) and T. malaianus (Balss, 1933) are found which can be distinguished by the following key.

Key to the species

Stimpson (1860) described the species from Hong Kong as Penaeus curvirostris. Alcock (1905) recorded it for the first time from the Indian coast as Trachypeneus curvirostris.

H. Balss (1933) described the species from Malyan water as subspecies of Trachypenaeus curvirostris Stimpson, 1860.  Farfante & Kensley (1997) included the species under genus Trachysalambria as a valid species.  Radhakrishnan et al. (2012) recorded it for the first time from Indian coast (east) as Trachysalambria fulvus (Dall, 1957).

Materials examined: During the present study no material was collected by the author and diagnosis has been given on the basis of literature.

The author does not agree with the four genus classification for the trachypenaeid group of prawns rather, re-establishment of Burkenroad’s (1934) scheme of classification is being suggested for the said group of prawns.  Farfante & Kensley (1997) created the genus Megokris gen. nov. from Trachypenaeus Alcock, 1901 are very close to Burkenroad’s subgenus Trachypenaeus (Trachypenaeus) except for some minor differences in seminal receptacle and distomedian and distolateral projection of petasma (Farfante & Kensley 1997).  Both the genera possess epipods on the first and second maxillipod and third pleopods.  Exopods present on all maxillipods and pleopods as well as podobranchae present on second maxillipods for both the genera Megokris Farfante & Kensley, 1997 and Trachypenaeus Alcock, 1901.  Pleurobranchae and arthrobranchiae are also similar in both the genera.  Hence, these two genera are being suggested for a single genus as Trachypenaeus Alcock, 1901.

Similarly, genus Rimapenaeus Farfante & Kensley 1997 and Trachysalambria Burkenroad, 1934 are closely related in respect to distribution of branchiae, epipods and exopods in the species of both the genera.  Again, Farfante & Kensley (1997) distinguished Trachysalambria from Rimapenaeus by the presence of anterior sternal invigilation of XIV forming a typical second bracket-shaped transverse groove and neither a well- defined median pocket nor a deep cleft interiorly to produce a paired flaps interiorly as in Rimapenaeus.  They also mentioned distolateral projections of petasma extended almost straight laterally or with their tips curving slightly backwards in Trachysalambria.  This character is controversial and confusing.  They also mentioned that the longitudinal suture of carapace is short in Trachysalambria, not exceeding epigastric tooth and in Rimapenaeus, suture extends beyond the level of epigastric tooth.  The last character is a strong point to create a separate genus for the species under genus Trachypenaeus Alcock, 1901.  Therefore, the present author accepts the genus Rimapenaeus as a valid genus as earlier described by Farfante & Kensley 1997.  As such the present author suggests a three genera classification for the Trachypenaeid group of prawns, viz., Trachypenaeus Alcock, 1901, Trachysalambria Burkenroad, 1934 and Rimapenaeus Farfante & Kensley 1997.

Alcock, A. (1901). A descriptive catalogue of the Indian deep-sea Crustacea Decapoda Macrura and Anomala, in the Indian Museum. Being a revised account of the deep-sea species collected by the Rural Indian marine survey ship “Investigator”, Indian Museum, Calcutta, 286pp.

Burkenroad, M.D. (1934). Littoral Penaeidea chiefly from the Bingham oceanographic collection, with a revision of Penaeopsis and descriptions of two New Genera and eleven new American Species. Bulletin of the Bingham Oceanographic Collection 4(7): 1–109.

Dall, W. (1957). A revision of the Australian species of Penaeinae (Crustacea, Decapoda: Penaeidae). Australian Journal of Marine and Freshwater Research 8: 136–231.

Haswell, W.A. (1879). On the Australian species of Penaeus, in the Macleay Museum, Sydney. Proceedings of the Linian Society of New South Wales 4: 38–44.

Farfante, I.P. & B. Kensley (1997). Penaeoid and Sergestoid shrimps and prawns of the World. Keys and diagnoses for the families and genera. Memoires Du Museum National d’Histoire Naturelle 175: 1–233.

Radhakrishnan (2012). Prawn fauna (Crustacea: Decapoda) of India - An annotated checklist of the Penaeoid, Sergestoid, Stenopodid and Caridean prawns. Journal of the Marine Biological Association of India 54(1): 50–72.

Schmitt, W.L. (1926). Report on the Crustacea Macrura (Families Peneidae, Campylonotidae and Pandalidae) Obtained by the F.I.S. “Endeavour” in Australian Seas. With notes on the species of “Penaeus” described by Haswell and contained, in Part, in the collections of the Macleay Museum, at the University of Sydney. Zoological (biological) Results of the Fishing Experiments carried out by the F.I.S. “Endeavour” 5(6): 311–381.