The amphibian diversity of selected agroecosystems in the southern Western Ghats, India

Abstract: A study was conducted to evaluate amphibian diversity in selected agroecosystems of central Kerala within the southern Western Ghats of India, from January to May 2017.  A total of 10 anurans were recorded from cashew plantation, coconut plantation, homegarden and rubber plantation using a combination of quadrat sampling and visual encounter survey.  We recorded three species endemic to the Western Ghats: Minervarya keralensis, Pseudophilautus wynaadensis and Indosylvirana urbis from these agroecosystems.  Pseudophilautus wynaadensis is a threatened species with Endangered status as per the IUCN Red List.  The present study shows a strong relationship between the types of agroecosystems and abundance of different amphibian species.  This study highlights the potential of agroecosystems within and adjacent to the Western Ghats mountains to act as important abodes to conserve generalist species of amphibians and to provide a suitable habitat for threatened and endemic species.

Copyright: © Syamili & Nameer 2018. Creative Commons Attribution 4.0 International License. JoTT allows unrestricted use of this article in any medium, reproduction and distribution by providing adequate credit to the authors and the source of publication.

Author Details: M.S. Syamili is an Assistant Professor and works primarily on herpetofauna and birds. P.O. Nameer is a Professor and his research interest include the taxonomy, biogeography and ecology of the vertebrates except fishes.

Acknowledgements: We express our deep sense of gratitude and thanks to Dr. Neelesh Dahanukar, IISER, Pune who helped us for analysing the data.  Sreekumar, E.R. and Harikrishnan, S. helped us in various ways during the course of the study. We thank the Dean, College of Forestry, Kerala Agricultural University for the financial and technical support. Azhar Ali, A, Jobin Joseph, U.S. Amal, Afthab Faisal, Habeel Sahal, Abhin M. Sunil, Abhirami M. Jayakumar, Dilgith Surendran, M.R. Bharath and Francis Scaria helped us in the field work. We also thank the anonymous reviewers and the Subject Editor for their critical comments.

Amphibians are important predator and prey species in both aquatic and terrestrial habitats, especially in the tropics where the diversity and abundance of taxa are high.  According to Whiles et al. (2006) loss of one species is akin to loss of two species in the case of amphibians.  Baillie et al. (2004) stated that among the vertebrates of the world, amphibians are the most threatened taxa and have the highest proportion of species on the verge of extinction.  The most pervasive threats to amphibians are habitat loss and habitat degradation.

For the amphibians of the Western Ghats the species accumulation curve has not yet reached a plateau (Aravind et al. 2004).  According to Nameer et al. (2015) & Das (2015) 90% of amphibians in Kerala are endemic to the Western Ghats and 33% belong to various threatened categories.  Generally, protected area networks are considered as the corner stone of biodiversity conservation efforts.   Perfecto & Vandermeer (2008) commented that conservation strategies which focus on tropical forests while ignoring the multiple land uses in which they are embedded are failed strategies.   According to Nair (2008), agroforests can be considered as potential oases for disappearing species, even though they cannot substitute for natural forests.  Wanger et al. (2009) assessed the herpetological diversity in cacao agroforests of Southeast Asia, where they observed that certain habitat features like increase in leaf litter favour the richness and abundance of disturbance-tolerant species.  Bionda et al. (2011) worked on the amphibians of various agroecosystems in Argentina and found that there are species which take advantage of the hydrology and hydroperiod of agroecosystems for their survival.  Not all agroecosystems contribute equally towards conservation.

Hence, for a realistic conservation strategy one should evaluate the conservation value of these multiple land use systems such as agroecosystems.  The present study is expected to shed light on the amphibian diversity and richness in agroecosystems of Kerala.

The study was conducted in the selected agroecosystems in  Thrissur District, southern Western Ghats, Kerala (10.53–10.55 0N & 76.27–76.280E, 20–70 m).  The chosen agroecosystems include, cashew plantation, coconut plantation, homegarden and rubber plantation (Fig. 1).  The study area chosen mostly comes within the main campus of the Kerala Agricultural University, in Kerala, southern India.  The campus has a total area of 391.44ha and is located very close to the Peechi-Vazhani Wildlife Sanctuary.  The major habitats include gardens, botanical garden, plantations of rubber, coconut, plantain, cacao, and orchards of mango, jackfruit, sapota and guava.  The whole area must have been under the forests about one and a half century or so and was subsequently converted mostly into rubber plantations.  Later the land was handed over to the Kerala Agricultural University (KAU) in 1971, and the KAU had developed these areas into the different land uses as is explained above.  The 14-year mean minimum temperature is 23.30C and 10-year mean maximum is 31.90C.  The area receives south-west and north-east monsoons, the greater portion of the rainfall, however is received from the south-west monsoon between June and September.  The mean annual rainfall is 2,803.4mm.  The mean number of rainy days per year is 112 days (KAU Weather Station 2014).

The study was conducted from January 2017 to May 2017.  Quadrat sampling was the primary method adopted for the study and was supplemented with visual encounter survey.

One hundred quadrats each having a size of 10m × 10m were deployed in the study area randomly with a minimum distance of 10m between two quadrats.  The observations were taken between 19:00hr and 20:30hr.  Two observers surveyed the quadrat from opposite corners approaching the center in a clockwise manner for thorough search of the ground-dwelling amphibians (Harikrishnan et al. 2012).

Visual encounter survey was conducted in the study locations (Harikrishnan et al. 2012).  This was done between 20:30–21:30 hr.  LED torches and head lamps were used to spot the amphibians.  During the survey, a range of possible microhabitats where the amphibians could be seen, such as rocks, marshes, fallen logs, tree holes, snags and water bodies were thoroughly examined. 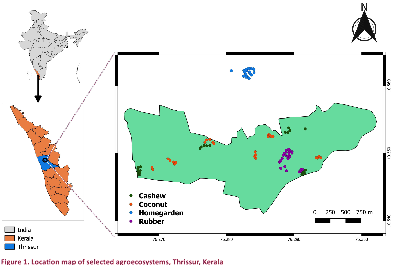 A total of 10 anurans belonging to five families were recorded from the selected agroecosystems of central Kerala (Table 1).  This includes two species each from the families Microhylidae, Ranidae and Rhacophoridae, three species from Dicroglossidae and one species from Bufonidae.  Dicroglossidae represented 30% of the amphibians encountered during the present study, however, these are commensal and generalist species. These include Euphlyctis cyanophlyctis, Hoplobatrachus crassus and Minervarya keralensis.  According to Gururaja et al. (2007), anthropogenic changes in land use type, canopy cover and hydrological regimes support the presence of more generalist amphibian species.

Three species that are endemic to Western Ghats namely Minervarya keralensis, Pseudophilautus wynaadensis and Indosylvirana urbis were reported from the agroecosystems that were studied (Biju et al. 2004, 2014; Biju & Bossuyt 2009; Gururaja 2012; Das 2015; Sanchez et al. 2018).  Pseudophilautus wynaadensis, an Endangered species (Biju et al. 2004) was found to be present in all the agroecosystems surveyed during the present study (Table 2).

Rathod & Rathod (2013) reported highest diversity of amphibians from organic coffee plantations of Kodagu District where diversity of native rainforest trees was also high.  Chemical contamination by the use of fertilizers and pesticides in the agricultural fields lead to incidence of abnormalities among common frog species as their breeding period coincides with the time of agrochemical application in the fields (Gurushankara et al. 2007; Kittusamy et al. 2014; Krishnamurthy et al. 2008).  No abnormalities, however, were observed among the 569 individuals of amphibians recorded during the current study.

During the present study, Common Indian Toad (Image 1) was encountered from cashew and rubber plantations.  It was also sighted in different colour morphs (Images 1A–D) and all individuals were adults.

Skittering Frog (Image 2) was sighted only at the pond in the rubber plantation.  In this case also only adult individuals were sighted.

Jerdon’s Bullfrog (Image 3) is another species which was detected only at the pond within the rubber plantation.  The individuals sighted included both adults and juveniles.  Hoplobatrachus crassus as well as Euphlyctis cyanophlyctis are species that prefer water bodies, thus justifying their presence at the pond.

Kerala Warty Frog (Images 4A–B) was detected from the homegarden and from the pond within the rubber plantations.  Only adult individuals were sighted for this species.  This species was formerly under the genus Fejervarya, but now is under the new genus Minervarya  (Sanchez et al. 2018).

Reddish Narrow-mouthed Frog (Image 5) was sighted from the premises of the pond in the rubber plantation during visual encounter survey.  Interestingly, all the individuals recorded were juveniles of very small size.

Painted Frog was spotted from a tree hole within the coconut plantation.  This species was sighted only once during the study period.

Fungoid frog (Image 6) was detected only from the rubber plantation.  It was found in the moist areas of the plantation.

Urban Golden-backed Frog (Image 7) was found on the rocky patches near the pond within the rubber plantation.

Jerdon’s Bush Frog (Image 9) was the most common frog during the present study and was recorded from all the agroecosystems selected for the present study.  We observed four colour morphs of the species during the study period (Image 9A–D).  All the 25 quadrats in the homegarden detected the presence of this species.  The highest count of the species was from rubber plantation where there were 30–40 individuals on a single herb of Rauwolfia tetraphylla near a moist area, due to a leakage in the irrigation pipeline that passed through the rubber plantation.

Association between the agroecosystems and abundance of amphibians

Polypedatus maculatus and Uperodon taprobanicus were only present in coconut plantation and this agroecosystem was not preferred by other species of amphibians encountered in the study (Fig. 2).  All other species of amphibians prefered rubber plantation.  Hoplobatrachus crassus, Hydrophylax malabaricus, Euphlyctis cyanophlyctis, Indosylvirana urbis and Microhyla rubra were exclusively present in the rubber plantation, while Minervarya keralensis and Pseudophilautus wynaadensis also preferred homegardens at some level, while Duttaphrynus melanostictus showed a preference to the cashew plantation (Fig. 2).

Rathod & Rathod (2013) explained that an open canopy can increase the temperature and evaporation and decrease the persistence of moist areas.  This can be one reason for fewer encounters with amphibians from coconut plantation and cashew plantation. 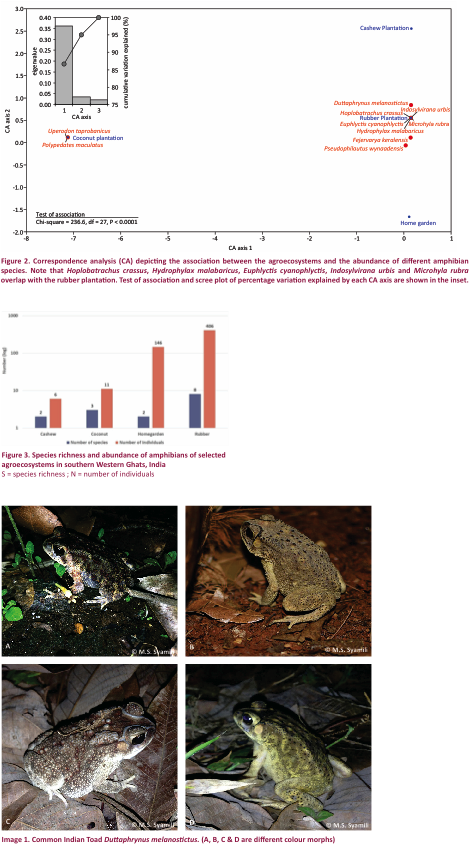 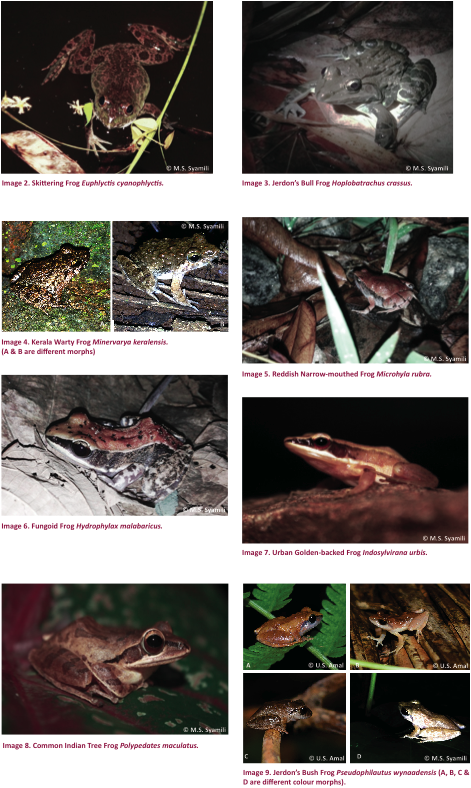 Protected areas cover 18% of the Earth’s land area and 8% of Kerala’s geographical area, and they are considered to be corner stones of biodiversity conservation.  It is a fact that most of these protected areas are virtual islands embedded within a matrix of multiple land uses.  A large proportion of biodiversity coexists with humans in their managed ecosystems, which can hold minimum viable populations of rare and endangered native fauna and flora.  The potential of such landscapes in conserving native biodiversity is still untapped.  The present study showed that agroecosystems have not only the potential to conserve generalist species, but also help to provide suitable habitat for some threatened and endemic species of amphibians.