Copyright: © Rachana & Varatharajan 2018. Creative Commons Attribution 4.0 International License. JoTT allows unrestricted use of this article in any medium, reproduction and distribution by providing adequate credit to the authors and the source of publication.

Acknowledgements: The study is funded by CRP-Agrobiodiversity Project of the Indian Council of Agricultural Research, ICAR - New Delhi.  The authors thank Dr. Masami Masumoto, Japan for the confirmation of P. darci and Dr. L.A. Mound, CSIRO Australia for the confirmation of the other two species.  We gratefully acknowledge Dr. K. Veenakumari, Principal Scientist, NBAIR for the specimens of P. perplexus, P. darci and Dr. A. Ramesh kumar, Scientist, ZSI for A. bimaculatus.  Thanks to reviewers for invaluable comments that helped to improve the manuscript.  Thanks are also due to Dr. Chandish R. Ballal, Director, NBAIR, for encouragement and facilities provided.

Abstract: The presence of three species of thrips, namely Asprothrips bimaculatus Michel & Ryckewaert, Plesiothrips perplexus (Beach), and Pseudodendrothrips darci (Girault), has been reported here for the first time from India, collected during a thrips survey carried out at Agartala in Tripura and Valparai in Tamil Nadu.  Among them, A. bimaculatus and P. darci belong to the subfamily Dendrothripinae, and P. perplexus comes under Thripinae.  Diagnosis and illustration for the above three terebrantians are given along with the images for the respective species.

The suborder Terebrantia includes eight families, of which thrips belonging to the families Aeolothripidae, Melanthripidae, Merothripidae, Stenurothripidae and Thripidae have been collected and recorded from India.  Among them, Thripidae is the biggest family, represented by a large number of economically important species.  A recent appraisal of this family in India reflects the presence of 307 species in 105 genera (Rachana & Varatharajan 2017).  While analysing the diverse species in terms of their practical attributes, it is apparently evident that the functional dynamics of thrips have gained momentum in recent years; their involvement in diverse aspects like pollination, gall induction, predation, and vector potential besides agricultural pests, have been realized (Mound 2005), in addition to being a bio-indicator to pollutants like heavy metals and radio active nucleotides (Daniela et al. 2011).  Owing to their wide range of feeding habits and habitat diversity, it becomes imperative to undertake a periodical survey of these minute insects from varied habitats and micro-niches.  Attempts made in such routine surveys resulted in the collection of three species which are newly recorded for India.  This paper reports the occurrence of Asprothrips bimaculatus, Pseudodendrothrips darci and Plesiothrips perplexus in India for the first time, of which the former two species belong to the subfamily Dendrothripinae, while P. perplexus comes under the subfamily Thripinae.  The diagnostic features of each species have been described below along with their photographic images.

The genus Asprothrips was erected by Crawford in 1938, with A. raui as type species, and currently comprises eight described species worldwide (ThripsWiki - accessed on 25 May 2018).  Nevertheless, as of now only two species are known from India (Rachana & Varatharajan 2017).  The genus Asprothrips can be easily diagnosed by its reticulate body with a complex sculpture; head transverse with anterior margin recessed, 3-segmented maxillary palp; metathoraxic endofurca lyre-shaped, extending to mesosternal furca; all tarsi usually 2-segmented; fore wing apex with 2 long apical setae; median pair of setae (S1 setae) on abdominal tergites II to VI shorter than distance between basal pores; males with or without pore plate on abdominal sternites (Tong et al. 2016).

The genus Plesiothrips, erected by Hood in 1915, comprises 17 described species worldwide (Thripswiki accessed on 25 May 2018), but existence of any individual of Plesiothrips has not been recorded previously in India.  The genus is characterised by the presence of a pair of dorso-apical setae on the ﬁrst antennal segment, which is unique among New World Thripinae.  Moreover, the anterior ocellus is situated anterior to frontal margin of compound eyes; and females have a highly reduced ovipositor, without reaching the apex of abdomen.  Males have unusually small antennal segment III and greatly enlarged segments IV–VI with numerous long setae; tergite IX bears a pair of drepanae and sternites III and IV bear a pair of circular pore plates (Mound et al. 2016).

Pseudodendrothrips Schmutz is a genus comprising leaf-feeding thrips of the subfamily Dendrothripinae under Thripidae.  Its members are comparatively smaller than other thripids, and a majority of them are very pale in colour.  The abdominal tergites bear transverse striae, with longitudinal ridge-like sculpture lines laterally; the metanotum has linear sculpture medially, with the median setae far behind the anterior margin.  The antennae are eight to nine-segmented; segment VI entire or subdivided, the sensorium on VI and VII arising close to the base of these segments.  The anterior marginal cilia of the forewing arise near the costal margin; the hind tarsi are exceptionally elongate with two stout spatulate setae ventro-laterally (Mound 1999).

Extensive random taxonomic surveys were conducted during 3–10 March 2016 and 17–20 April 2016, respectively at Agartala in Tripura and Valparai in Tamil Nadu.  Specimens were collected at random by gentle tapping of plant parts on the board and laying yellow pan water traps at the canopy level of the plants at specific localities with dense and diverse crops.  The collected specimens were preserved in collection fluid (nine parts 10% alcohol + one part glacial acetic acid + one ml Triton X-100 in 1000ml of the mixture). Specimens were balsam mounted for permanent preservation (Ananthakrishnan & Sen 1980) and they were subsequently sorted out and identified with the help of standard keys (Mound 1999; Mound et al. 2016; Tong et al. 2016).  The images of all the three species were photographed with the help of a binocular research microscope. 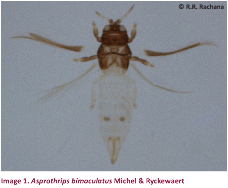 The presence of a pair of longitudinal brown markings on the pronotum is characteristic of Pseudodendrothrips bhattii and P. darci, being absent in rest of the members of this genus (Mound 1999). These two species are difficult to distinguish, but unpublished observations of Masami Masumoto (Masami Masumoto, in litt., 05 April 2017) state that P. bhattii is devoid of a dark line on pronotum, differentiating it from P. darci. 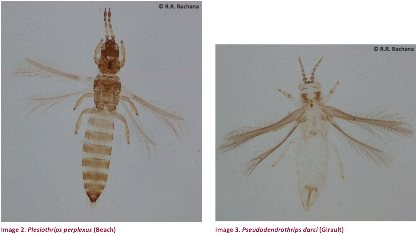 The present report on the occurrence of three terebrantian species, namely Asprothrips bimaculatus, Plesiothrips perplexus and Pseudodendrothrips darci in India adds a new dimension to the faunistic wealth of the country.  Since the eight known species of Asprothrips are all described from Asia, the present study shares the view that they appear to be Asian in origin.  In this context, the present collection of A. bimaculatus from India corroborates the above view.  Further, it is also evident from the tendency of widespread occurrence of A. seminigricornis in greenhouses of several countries (Mound 1999) and a conspicuous distribution pattern of A. bimaculatus between the Caribbean region and Asia (Tong et al. 2016) that the members of this genus can move far and wide from Asia.  With respect to Plesiothrips, it is known that members of this genus are invariably confined to the New World, except for P. perplexus that has become widely spread across the tropics and sub-tropics on grassy weeds.  There were, however, no reports pertaining to genus Plesiothrips, nor occurrence of P. perplexus in India.  Hence our findings take the credit of recording the genus Plesiothrips in India for the first time.  Although the present report is based on thrips collection at random from diverse habitats and agro-ecosystems, chances of these species becoming active on crops are appreciably high by virtue of the fact that members of the genus Asprothrips have already been recorded from the leaves of turmeric and arrow root (Ananthakrishnan 1984).  Similarly, the dendrothripine P. darci has been described as a pest of Ficus species in northern Australia (Mound 1999).  Therefore, the present study not only highlights the new record of these thrips in India, but indicates the need for further study to monitor these herbivores so that they do not attain the status of a pest.