Copyright: © Pandey et al. 2018.Creative Commons Attribution 4.0 International License. JoTT allows unrestricted use of this article in any medium, reproduction and distribution by providing adequate credit to the authors and the source of publication.

Acknowledgements: The authors thank the authorities of Pondicherry University for providing the necessary facilities to carry out this work.

Sea slugs are famed for their exquisite coloration, feeding and defense behavior (Wagele et al. 2008).  Traditionally, sea slugs were grouped under the subclass Opisthobranchia until a recent taxonomy revision (Bouchet et al. 2017) placed them in the subclass Heterobranchia.  Sea slugs, along with members of the heterobranch family Alpysiidae (Lamark 1809), are collectively referred to as sea hares (Nimbs et al. 2017) on account of their characteristic largerhinophores which resemble the ear of a hare (Willan1998).  Sea Hares are benthic herbivorous gastropods that attain a larger size than other molluscs.  Their larvae are characterized by a planktonic stage, while adult dispersion is limited to short-range crawling and swimming (Medina et al. 2005).  The availability of food choice determines their distribution, which ranges from intertidal to shallow shelf waters (Thompson 1976; Willan 1979, 1998).  Most adult sea slugs lack shells, and in the few which do have shells it is either reduced or internal, and does not serve as protective armour.

Sea hares belong to the family Aplysiidae under the orderAplysiida. Members of Aplysiidae are medium to large with a soft internal shell over the visceral rear end.  The shell can be partially or fully enclosed in the mantle skin depending on the species.  Sea hares are generally herbivores and their diets include a variety of red, green or brown algae and seagrass and the colour of the body is diet-derived from the type of algae upon which they feed.  This helps in camouflaging them from predators.  While feeding upon the algae they tend to concentrate the toxins found in the algae.  An opalinegland, which secretes a white repugnatory fluid, is present in most species.  Some may also exude a purple or pink fluid in response to disturbance (Wells & Bryce 1993).  This behaviorhas led to common names such as, for example, the ‘ink pot’ for Dolabella auricularia([Lightfoot], 1786), which releases a profuse stream of purple ‘ink’ when irritated or threatened by predators.

The Indo-Pacific region supports a rich diversity of marine taxa especially sea slugs, and more than 3,400 species are known from this region (Gosliner & Draheim1996).  Most studies of Indian sea slugs are recent (Apte 2009; Apteet al. 2010; Apte & Salahuddin2010; Ramakrishna et al. 2010; Sreeraj et al. 2010, 2012; Bhave & Apte2011; Matwal & Joshi 2011; Kumar et al. 2011; Sethi & Pattnaik 2012), and further study is required to fully cover the vast number of species.  During a survey of the macrobenthos of Andaman Islands we came across Dolabella auricularia, which is reported from the mainland coast of India (Apte2009; Sethi et al. 2014) and Andaman islands (Rao 2003), although there is a lack of specific location and geographical coordinates in the Andamans.  In the present report we provide a detailed account on taxonomy, medical importance, distribution with geographical coordinates and morphological features supplemented with in situ and ex situ pictures.

During the intertidal macrobenthos survey of Andaman Islands two individuals of D. auricularia were observed from sea grass intertidal region of light housearea of Hut Bay, Little Andaman and a mixed substratum intertidal area of Burmanallah region of South Andaman (Fig. 1 c-d).  One representative specimen was brought to the laboratory for examination and identification.  In the laboratory, the specimen was cleaned (the ink squirted during collection) and identification was carried out based on the morphological characters of the body and shell following Gosliner et al. (2008).  The specimen was narcotized using a few drops of magnesium chloride solution and transferred into 5% formaldehyde solution.  The formaldehyde fixed animal was later transferred to 70% ethanol for long termpreservation and deposited at national repository at Zoological Survey of India, Andaman & Nicobar Regional Centre (ZSI/ANRC-17333 dt.15.05.2017).  The specimen recorded from Burmanallah was preserved in Pondicherry University Museum for future reference (PU/DOSMB/TG001 dt.22.v.2018). 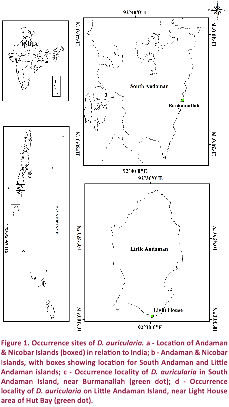 Description: The Wedge Sea Hare, Dolabella auricularia (Lightfoot, 1786) is a rather large sea hare in the family Aplysiidae.  This species can be easily identified by its posterior truncated, flattened disk which gives the impression of being chopped off. The size of the specimen is between 8cm and 12cm and weight 130gm, but they can grow as long as 50cm in length (Gosliner et al. 1996).  Measurements and photographs were taken in live condition and due to the highly contractile and elastic body of the sea hare, slightly different body lengths are displayed in the figures. The dorsal side of body is brown in colour and covered with green coloured tubercles/papillae giving the animals a prickly appearance whereas ventral side is very smooth and completely brown (Image 1).  When the animal was gently poked in the field it released a surge of red ink (Image 2a).  Head is short and blunt consisting cephalic tentacles which are longer than the rhinophores and light green in colour.  Rhinophoresare flap like and crenulated (Image 2b). Eye spots are located laterally between cephalic tentacles and rhinophores (Image 2c).  The parapodiaare fused, except for a circular aperture located anterior to the disk. The shell is fully covered with parapodia and is thin, faintly dentate, resembling the structure of human ear.  The colour of the shell is pearly white except along the anterior margin which is black in colour (Image 2d–e).

Feeding:D. auricularia is herbivore and generally prefers to feed on seagrass.  But, Pennings& Paul (1993), while studying the feeding behaviour of D. auricularia along western Pacific coast, documented that this species prefer to feed on mixed diet rather than just sea grasses.

Importance of the Wedge Sea Hare: Dolabella auricularia is an important food source throughout the Pacific especially in Visaya Islands in the Philippines, Samoa, Tonga and Fiji where the egg mass of this species is eaten.  This sea hare is known to possess anti-cancer and antimicrobial properties.  Some of the compounds which have been extracted from D. auriculariainclude dolastatin 10, an antineoplastic peptide (Pettit et al. 1987), dolastatin 15, a potent antimitotic agent (Bai et al. 1992) and dolabellanin B2, an antimicrobial peptide isolated from skin and mucus (Iijima et al. 2003).  In marine aquaria this species is used to control algal growth. 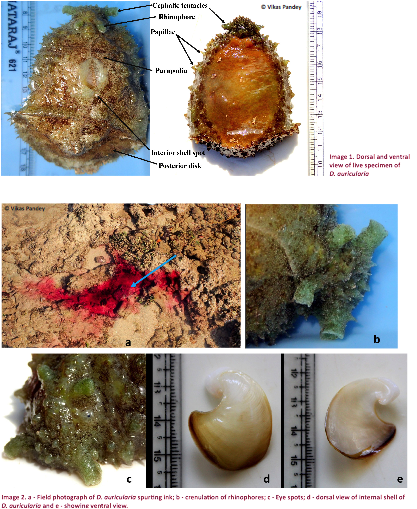 Apte, D., V. Bhave& D. Parasharya (2010). An annotated and illustrated checklist of the opisthobranch fauna of Gulf of Kutch, Gujarat, India with 21 new records for Gujarat and 13 new records for India: part 1. Journal of the Bombay Natural History Society 107(1): 14–23.