Fish diversity and the conservation status of a wetland of Cooch Behar District, West Bengal, India

Abstract: A study was carried out from March 2016 to February 2017 to investigate the diversity of fishes and the conservation status of Bochamari Beel, a natural wetland of Cooch Behar District, West Bengal, India.  The study revealed the occurrence of 40 species of fishes belonging to 31 genera under six orders and 15 families.  Cyprinidae was the dominant family with 14 species followed by Channidae with four species, Ambassidae and Bagridae with three species each, Nandidae, Mastacembelidae, Belontiidae, Siluridae and Clariidae with two species each whereas Cobitidae, Belonidae, Gobiidae, Anabantidae, Tetraodontidae and Notopteridae were represented by a single species each.  The status of species of this beel included one Endangered species, one Vulnerable species and four Near Threatened species.  The maximum fish diversity was recorded in the monsoon season (H’=2.876) as compared with pre monsoon (H’=2.124) and post monsoon (H’ =1.735).  The evenness index varied from 0.640 (post monsoon) to 0.822 (monsoon), which indicates uneven distribution of fishes in this beel.  Indiscriminate fishing throughout the year, along with extensive weed infestation could be responsible for depletion of fish diversity in this beel.

Copyright: © Das 2018. Creative Commons Attribution 4.0 International License. JoTT allows unrestricted use of this article in any medium, reproduction and distribution by providing adequate credit to the authors and the source of publication.

Author Details: Shri Ram Krishna Das is an Assistant Professor in Industrial Fish and Fisheries, Asutosh College. He obtained his master degree in Zoology (Specialization- Fish Biology) in 2005 from Visva-Bharati and qualified NET (CSIR) in Life Sciences in 2010. His interested field of research are fish diversity, taxonomy and fish toxicology.

According to the Ramsar Convention, wetlands are areas of marsh, fen, peatland or water, whether natural or artificial, permanent or temporary, with water that is static or flowing, fresh, brackish or salt, including areas of marine water, the depth of which at low tide does not exceed six meters (Ramsar Convention Secretariat 2013).  Wetlands are classified into five categories such as (a) oxbow lake, (b) fresh water lakes, (c) fresh water ponds, (d) marshes, swamps and bogs, and (e) reservoirs (Kar et al. 2007).  India has extensive flood plains in the form of oxbow lakes such as beels, jheels, mauns, and chaurs especially in the states of West Bengal and adjoining places, like Assam and Bihar.  Beels are shallow, nutrient rich water bodies formed due to a change in course of a river.  Some of these retain connection with the main river, at least during monsoons, while others have lost it permanently.  These are perennial wetlands that contain water throughout the year (Kar et al. 2007).  Beels of Assam generally possess high potential for in situ fish production.  A number of them also provide a collection sink for fish produced in the surrounding flooded catchments.  The average yield of Assam on the basis of enquiries made in 23 beels in the state was 173kg/ha (Bhattacharjya & Sugunan 2000).

Northern Bengal comprises those districts of West Bengal that lie north of the river Ganga.  The term does not denote any natural division and is purely an administrative connotation.  Seven districts constitute northern Bengal.  These are: Malda, South Dinajpur, North Dinajpur, Darjeeling, Jalpaiguri, Alipurduar and Cooch Behar.  Faunistically, however, these areas are numerous in variety and taxonomically interesting.  This may be because of the rich Himalayan foothills with the numerous streams and major rivers rushing to the plains through these districts (Jayaram & Singh 1977).  A large number of wetlands in the form of beels are found in northern Bengal, especially in the district of Cooch Behar.  Bochamari Beel is one of the very important natural wetlands located in the subdivision Tufanganj of the district of Cooch Behar.  It is a part of Rasik Beel wetland complex (Das et al. 2013).  The Rasik Beel wetland complex (RBWC) is the largest wetland complex in Cooch Behar District of West Bengal covering around 18.40km2 of area of which the wetland occupies almost 1.78km2 area.  The Ministry of Environment, Forest & Climate Change (MoEFCC), Government of India, has identified 94 wetlands of national importance, many of which are protected areas including Rasik Beel (NWCP 2009).  The vast wetland complex constitutes water bodies of varying sizes, namely, Rasik Beel, Raichangmari Beel, Bochamari Beel, Sakobhanga Beel and Noldoba Beel. The nature of the beels is of the ox-bow lake and formed by the meandering of the Raidak, Sakobhanga and Ghoramara rivers (Roy et al. 2012).  Most of the beels of the RBWC become well connected only during the monsoon months of a year.  Bochamari Beel is a perennial beel which retains water throughout the year.  On the basis of riverine connection, the Bochamari Beel may be termed as a closed beel as it is completely cut-off from the nearest rivers and receives water mostly from their catchment areas following the monsoon rains.  Bochamari Beel has remained as a major resource for capture fisheries and serves as a means of livelihood for about five hundred fishermen families.  The fishing activities are totally prohibited in the remaining beels of the Rasik Beel wetland complex.

Fish constitutes almost half of the total number of vertebrates in the world.  Indian freshwater fish diversity is very rich with as many as 1,027 species, comprising primary, secondary and alien freshwater fishes.  Among them primary freshwater fishes include 858 species belonging to 167 genera under 40 families and 12 orders.  Further, 137 species of secondary freshwater fishes that frequently enter and thrive in freshwater reaches of rivers are also known from India.  Thirty-two species of alien fishes belonging to 21 genera of nine families and seven orders are found in the fresh water systems of India. Out of this, 16 species are well known, potential invasive alien fishes in India (Gopi et al. 2017).  On the other hand West Bengal contains about 207 freshwater fishes (Sanyal et al. 2012).  The most comprehensive account of the fish fauna of northern Bengal was published by Shaw & Shebbeare (1938).  They listed about 131 species in their treatise  whereas, Jayaram & Singh (1977) recorded about 96 species of fishes in northern Bengal.  Due to the presence of a number of threatened, endemic and unique/interesting species in northern Bengal, this region might be considered as a “Hot Spot” of fish resources of West Bengal (Barman 2007).

Das et al. (2013) studied the faunal diversity of RBWC, Cooch Behar.  They reported the occurrence of 53 species of fishes belonging to nine orders, 22 families and 11 sub families in different beels of Rasik Beel wetland complex.  They also reported the occurrence of 173 species of birds, four annelids, 49 arthropods, six molluscans, five amphibians, six reptillian and nine mammalian species.  A detailed study of fish diversity and the conservation status in Bochamari Beel, however, is lacking.  Therefore, the present investigation was carried out to document the fish diversity and conservation status of Bochamari Beel of Cooch Behar District.

The study was carried out in Bochamari Beel (26.250N & 89.440E, 38m elevation), a natural wetland of Cooch Behar District, West Bengal, India from March 2016 to February 2017 (Fig. 1).  The shortest distance from Cooch Behar Town to the Bochamari Beel is about 55–58 km whereas it is about 25–30 km from Alipurduar Town.  Fish were harvested every fortnight from the beel using gill nets (mesh size 0.6–7.0 cm), cast nets (mesh size 0.6–6.0 cm), drag nets (mesh size 0.10–0.15 cm), push nets (mesh size 0.10–0.15 cm), box traps, ‘Koncha’ (spear fishing) or ‘Teta’ , ‘Barsha’ (hook and line),  and hook and line (Images 1 & 2).  To investigate the seasonal variation of fish communities, this study period was categorized into three phases, viz., pre-monsoon (Feb-May) with little or no rainfall but with very high temperature, the monsoon (June–September) with heavy rainfall and relatively lower temperature, and post-monsoon (October–January) season with a drastic reduction of temperature and occasional rainfall.  To find out the seasonal diversity index and evenness index, pooled data of these months together were taken.  Colour, colour patterns, spots/blotches, stripes and other characters of the fishes were noted immediately after harvesting and photographs were taken by a digital camera (Images 3–37).  Harvested fishes were then killed and preserved in 10% formalin solution for further study.  All the specimens are deposited in the aquatic animal biodiversity museum of the department of Industrial Fish and Fisheries, Asutosh College, Kolkata, West Bengal, India (Registration number: AC-IFF/AABM/Pisces/ specimen no. B/1–40).  The fishes were identified in the laboratory using the taxonomic keys of Jayaram (2009, 2010) and Shaw & Shebbeare (1938).  The diversity and evenness indices were calculated according to Shannon (1948) and Pielou (1966).

Evenness index (Pielou 1966): e =H’/lnS where, H’ is the Shannon index of general diversity and S is the number of species. 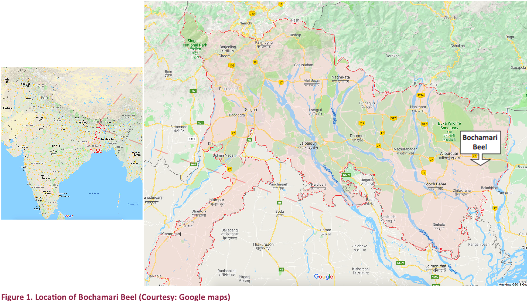 The species diversity index of different seasons ranged from 1.735 to 2.876.  In this study a maximum fish diversity was recorded during the monsoon season (H’=2.876) as compared to the pre monsoon (H’=2.124) and post monsoon (H’=1.735) as this beel remained well connected to the other beels of the wetland complex during the monsoon months but well separated from each other during the rest of the season.  Variety of different fishes enters into the Bochamari Beel from other beels during monsoon, which has resulted in a higher value of fish diversity index.  The same result was also reported by Kar et al. (2006) in Sone beel of Assam, India.  The evenness index at three seasons (monsoon = 0.822, post monsoon = 0.640, pre monsoon = 0.668) indicates uneven abundances of different fishes in this beel.  The details about the number of species, number of individuals, Shannon index and Evenness index are presented in Table 2.

The fishing gears used in this beel were fishing net (gill net, drag net, push net, cast net), tackle (hook and line, ‘Barsha’) and miscellaneous gears (‘Koncha’ or ‘Teta’, box trap) as also reported in the lentic and lotic water bodies of Cooch Behar District (Das & Barat 2014).  The details about the fishing gears operated in this beel are presented in Table 3.  Most of the fishing nets have a very small mesh size (1cm and below), as a result a large number of juvenile fishes are being captured.  It was also observed that a significant number of brood fishes were invariably killed in this beel during the monsoon month.  Moreover, indiscriminate fishing throughout the year is likely to result in the depletion of fish diversity.

The Bochamari Beel is extensively infested by a number of aquatic weeds such as Eichornia sp., Eutricularis sp., Trapa sp., Erienthus sp. and Phragmites sp. (Das et al. 2013).  These species have high growth rate and clog waterways, making fishing, boating, and almost all other water related activities impossible.  The mats of these plants block the penetration of sunlight.  It was also revealed that the beel has been affected by the siltation, water pollution due to leakage of pesticide used in nearby agricultural lands and over flooding during heavy rainfall in monsoon months.

Table 3. List of fishing gear operated in the beel

Mesh size restriction: To maintain a sustainable stock, the fishing net with lower mesh size should be prevented.  Fishing net with mesh size of more than one centimeter may be used.  Regular inspection by the authorities of fisheries department should be undertaken to prevent such malpractices.  In this respect, net makers should also be given the proper instructions.

Declaration of closed season: To carryout undisturbed spawning, closed season should be implemented during the monsoon months (June to August) to maintain the optimum fish stock.  All types of fishing activities should strictly be prohibited at that time.

Awareness programme: Awareness programme regarding the conservation of threatened and endemic fishes should be undertaken.  In this aspect, the state and district fisheries department, educational institutions, other government and non government organizations can play a vital role. 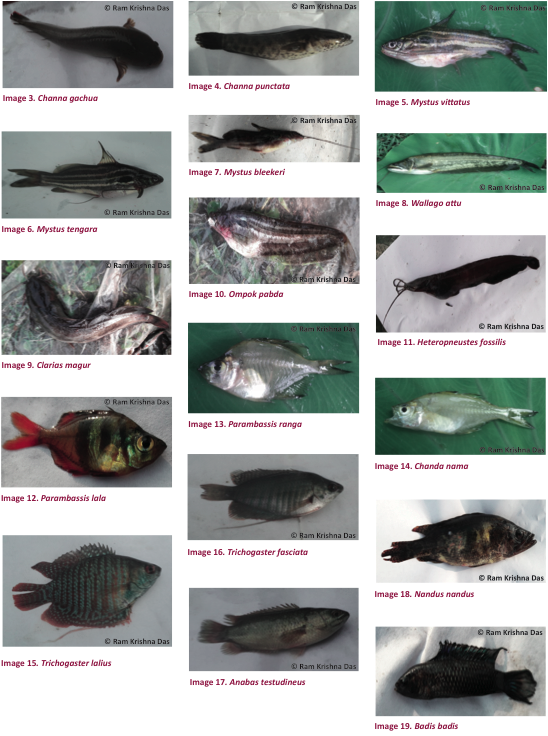 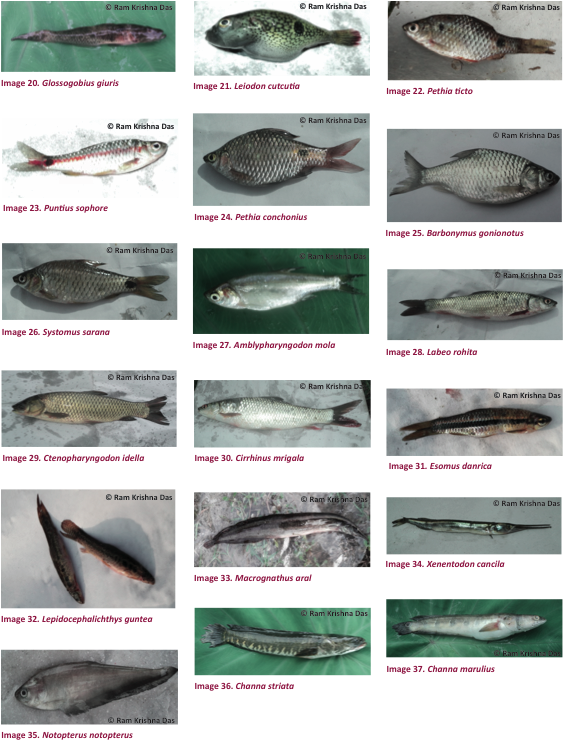 Barman, R.P. (2007). A review of the fresh water fish fauna of West Bengal, India with suggestions for conservation of threatened and endemic species. Records of the Zoological Survey of India, Occasional Paper 263: 1–48.

Pielou, E.C. (1966). The measurement of diversity in different types of biological collection. Journal of Theoretical Biology 13: 131–144.