The ecology and distribution of percoid fish Dario neela from Wayanad in the Western Ghats of Kerala, India

Copyright: © Thampy & Shaji  2018. Creative Commons Attribution 4.0 International License. JoTT allows unrestricted use of this article in any medium, reproduction and distribution by providing adequate credit to the authors and the source of publication.

Acknowledgements: The study was a part of the dissertation work, done for the fulfillment of M.S Wildlife Studies program at KVASU- CWS.  The authors are grateful to the course director, Centre for Wildlife Studies, KVASU and all the teaching faculties of CWS for all the moral support.  The authors sincerely thank the Department of Forest and Wildlife, Government of Kerala for providing the permissions and for their kind support throughout the study.  Authors are extremely thankful towards Dr. M. Ashokkumar, Dr. Rajeev Raghavan and Mr. M. Bipin Paul for their cooperation and support during the study period.

Abstract: Dario neela, a newly described badid fish endemic to the Western Ghats is little known to science. Distribution and ecology of this species is not well documented.  In this paper, we provide information on new records of this rare fish from Wayanad region of the Western Ghats and discuss its distribution, ecology and conservation.

At present, the further distribution of Dario neela is not known, although the presence of Dario species in Wayanad is known from the collections by Francis Day about 140 years ago (Britz et al. 2012).  The perusal of ichthyological literature until Britz et al. (2012) avows that none of them reported the presence of Badis or Dario from the Western Ghats of Kerala and Wayanad in particular (Shaji & Easa 1995, 1997; Easa & Basha 1995).  None of them could locate the specimens from Day’s locality, which may either be due to the rarity of the species or unavailability of the exact location of Day’s collection.  Dario neela was described in 2018 based on the collections from Wayanad and the study also suggested that Day’s collections were in fact Dario neela and not Dario urops (Britz et al. 2018).

A recent survey in the Kabini watershed of the Cauvery basin in Wayanad helped in documenting the further distribution of this species in the Kerala part of the Western Ghats (Fig. 1).  We provide new information on the habitat and ecology of the species.  Specimens were collected and a few were reared in captivity to study the social and reproductive behavior of the species.

Fishes were collected mostly by sieving with clothes and mosquito nets.  A few specimens were fixed in 10% formalin and transferred into 70% ethanol for permanent storage.  Ten individuals with two males and eight females were selected, grouped and reared under captivity to study the social and breeding behavior of the species. 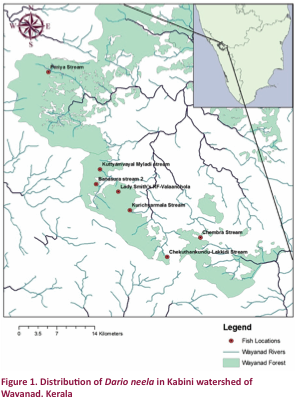 The morphological data of the species is given in Table 1.

There is an appreciable difference in the morphological attributes of male and female (Images 1 & 2).  Males were larger than females with well-developed fin rays.  The pectoral fin length and caudal fin length were found to be higher in males when compared with females.  Caudal peduncle length and pre-anal length were higher in females.

The specimens were collected from seven different localities of South Wayanad Forest Division, viz., Kuttyamvayal-Myladi Stream and an unnamed stream of Banasura forests, Valaanchola Stream of Lady Smith’s RF, Chekuthankundu Stream of Lakkidi RF (Image 4), two unnamed streams of Kurichyarmala and Chembra and from two locations in North Wayanad Forest Division, from the Periya Stream (Image 5) and the type locality, a small unnamed stream joining Periya Stream (Table 2).  All these are lower order streams draining into Kabini, an east flowing river (Fig. 1).  All these collection localities were sections of the streams flowing through evergreen forest patches and the species could be recorded from an elevation range between 700–1,050 m.

The flow rate was minimal and the collection localities were characterized mostly by pools and runs.  The substrates were constituted by sand, mud, gravel, pebbles, boulders and bed rocks.  Boulders and sand dominated in the study cites altogether (80%) and the average constitution of the pebbles and gravels were of 10% in the sites of collection.  All the collection sites were characterized by heavy litter fall over various substrates.  The water temperature varied from 17.9–22.6 0C.  The canopy cover varied from 70.38–97.43 %.  The physical parameters of various sites at the time of collection are given in Table 3.  Shallow regions of the streams were heavily occupied by vegetation like Lagenandra sp., Colocasia sp. etc. which acted as fish cover.  D. neela specimens were mostly collected from submerged leaf litter, tree roots, submerged vegetation and Ochlandra clumps.  The co-occurring species recorded from various collection localities were Devario cf. malabaricus, Barilius gatensis, Haludaria fasciata, Schistura cf. nilgiriensis, Schistura semiarmata and Neolissochilus wynaadensis.

Although not a shoaling species, D. neela tend to live in small groups of 5-–10 individuals in the wild, with a well-defined territory for each individual.  The groups are typically formed by two males and several females defending territories near each other.  In such groups, one male always dominated the other invariably.  Larger dominant males defended larger territory when compared with the inferior male and females.  The dominant males were darker colored (black with a bluish tinge) and the colour disappeared when the animal was stressed (Image 3).  The distal margin of the fins were an iridescent blue-green.  The inferior males were greyish brown in colour with faded brown vertical bands which fade away soon after preservation.  The distal margin of fins were similar in colour and appearance to that of dominant males.  Females were smaller than males and had a beige-brown colour on the body with irregular vertical bands and the fins were devoid of the iridescent colour. The caudal spot was present in all specimens (Image 1).

The spawning behavior of Dario neela was studied in a well-planted glass tank, which mimicked the natural ecosystem from where the fish were collected.  A large tank (190L) was used to study the social and breeding behavior of the species.  Tank water properties like pH and temperature were almost similar to the stream condition.  The tank was planted with locally available aquatic vegetation like Lagenandra toxicaria and Cabomba sp.  Hiding spaces were provided in the form of large rocks and artificial caves.  The substrate was set with sand and leaf litter collected from the streams.

Dominant males mostly occupied the heavily planted regions of the tank with enough hiding spaces and aggressively defended the territory (typically 40cm2) from the inferior male and females.  Females were found to hide under leaf litter and rocks, while the inferior male defended smaller territory when compared to the dominant male.

Male Dario neela chased the females and displayed his bright colors to attract the females, shivering and shaking his body.  Gravid females when ready to spawn followed the male to his territory.  Mating is usually attained by a spawning embrace, where the mates wrap around each other (Fig. 2).  The female released eggs after two to three fake matings and the males fertilized it.  Eggs were usually scattered in dense vegetation, in caves or under leaf litter.  After spawning, the male chased away the female preventing her from eating the eggs.  Eggs were found to hatch within 48 hours in normal conditions, with the larvae hiding in vegetation immediately after hatching.  Males were found to protect their territories aggressively after spawning.

Table 2. Physical settings of the habitat of Dario neela

Dario neela is the only species of badid fish known from the Western Ghats of Kerala.  The present study described the distribution of this rare species in the Wayanad part of Nilgiri Biosphere Reserve.  Dario urops was described based on the specimens collected from a stream draining into Barapole tributary of Valapattanam River in Karnataka and the specimens collected by Francis Day (1875–1878) from Wayanad were originally assigned to this species (Britz et al. 2012).  A recent study (Britz et al. 2018), however, revealed that the specimens collected from Wayanad is in fact a separate species and named it as Dario neela, referring to its blue coloration.

The population trends of this species is not well studied and the present study indicates that the species is a habitat specialist, recorded only from less disturbed clear water mountain streams which might have accounted for its rarity.

The antiparallel spawning embrace has been reported in Badidae, Anabantoides, Nandidae and Channidae by Barlow et al. (1968).  A similar type of spawning embrace was observed in Dario neela.  The present success in captive breeding helps in developing future ex situ conservation plans for this species.