Copyright: © Rachana & Varatharajan 2018. Creative Commons Attribution 4.0 International License. JoTT allows unrestricted use of this article in any medium, reproduction and distribution by providing adequate credit to the authors and the source of publication.

Acknowledgements: The study is funded by CRP-Agrobiodiversity Project of the Indian Council of Agricultural Research, ICAR - New Delhi. We thank Dr. L. A. Mound, CSIRO Australia for species confirmation. The authors gratefully acknowledge Dr. K. Veenakumari for the specimens of C. punctipennis. Thanks are due to Dr. Chandish R. Ballal, Director, NBAIR, for encouragement and facilities provided and to Dr. Sunil Joshi, NBAIR for his help in photography.

Abstract: Caliothrips punctipennis (Hood) and the male of Western Flower Thrips Frankliniella occidentalis (Pergande) have been recorded for the first time from India.  F. occidentalis was collected on the leaves of Erythrina indica from Ooty in the Nilgiris, the Western Ghats, southern India, whereas C. punctipennis was collected from yellow pan traps laid at Great Nicobar, India.  Considering the quarantine importance of the pest F. occidentalis, the report of the male for the first time in India needs attention and concern.  Males are also known to be more effective vectors of tospoviruses than females.  Xerochrysum bracteatum, the Common Golden Everlasting Daisy, is often taken out of Ooty by tourists to other parts of the country.  This along with other planting materials carried by tourists and farmers could aid in the dispersal of F. occidentalis to the temperate regions of northern and southern India, where it is likely to thrive in the congenial climatic conditions prevalent there.  Under these circumstances, it is imperative that quarantine mechanisms within the country are activated and strengthened, to prevent the spread of this notorious pest to the rest of India from the pockets of its occurrence in southern India - particularly the Nilgiris.  The diagnostic characters of both species are discussed.

The genus Frankliniella was erected by Karny (1910) in the form of a footnote, and the type species, Thrips intonsa Trybom, was subsequently designated by Hood (1914).  Sakimura & O’Neill (1979) redefined the genus Frankliniella Karny based on the pattern of abdominal ctenidia and associated setae.  The species has not been reported from India, until Tyagi & Kumar (2015) collected four females in 2014 from Bengaluru, Karnataka, without any males in their collection.  Studies on recent collections from Ooty, Tamil Nadu has revealed the presence of a single male specimen, the first record of the male of F. occidentalis from India, which is reported below.

The genus Caliothrips, erected by Daniel in 1904, comprises 25 described species worldwide (Thripswiki - referred on 7 December 2017), with five species known from India (Rachana & Varatharajan 2017).  Hood in 1912 described the species punctipennis under the genus Heliothrips.  Caliothrips is closely related to many Panchaetothripinae genera, but can be recognized by the following characters: parallel cheeks, one segmented tarsi, antennal segments III and IV with forked sense cones, absence of a complete comb of microtrichia on hind margin of tergite VIII (Wilson 1975).  In addition, members of the genus Caliothrips are recognisable by the form of sculpture on head and pronotum, with prominent markings within the reticulations and the presence of a coiled apodeme within each hind coxa.  This apodeme may be one of the various adaptations amongst adults of thrips that are associated with the ability to jump suddenly (Mound et al. 2011).

The objective of this paper is to report the occurrence of Caliothrips punctipennis and the male of F. occidentalis for the first time in India.  In the order Thysanoptera, males are always less numerous than females and sometimes hardly noticed (Ananthakrishnan 1984).  Considering the quarantine importance of the pest, the report of the male needs attention and concern.

Random taxonomic surveys were conducted from 16–20 February 2016 and 15–--24 March 2016 at Ooty, Tamil Nadu and the Andaman & Nicobar islands, India, respectively, for collection of thrips.  Specimens were collected by the standard beating method and were preserved in thrips collecting media (nine parts 10% alcohol + 1 part glacial acetic acid + 1 ml Triton X-100 in 1000 ml of the mixture).  Specimens were mounted in Canada balsam for permanent preservation (Ananthakrishnan & Sen 1980).  The specimens were collected at random, subsequently sorted out and identified using appropriate keys (Wilson 1975; Cavalleri & Mound 2012). 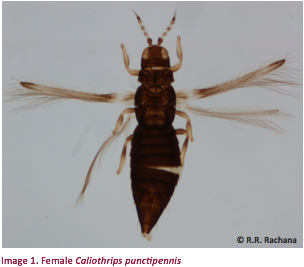 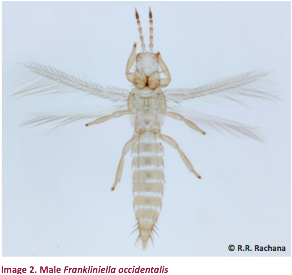 From the view point of faunistic wealth of the country, the present record on the occurrence of the two terebrantian thrips, C. punctipennis and F. occidentalis in India adds a new dimension.  The first record of male individuals of F. occidentalis, however, is more significant in the present context by virtue of its effectiveness in disseminating the tospovirus.  Although existence of female individuals of F. occidentalis has already been known from Bangalore (Tyagi & Kumar 2015), it was earlier thought that they were just stray individuals and not part of a thriving viable population.  But, with the collection of both male and female in the present survey, it became unambiguous that they represent a true population with the dominance of females.  Nevertheless, the presence of a male provokes more worry to the applied entomologists because males are known to be more effective vectors of tospoviruses than females (Riley et al. 2011).

Literature has unequivocally reflected that F. occidentalis, the WFT is responsible for transmission of as many as five species/strains of tospovirus including Groundnut Bud Necrosis Virus (GBNV), the most important virus affecting peanut, potato, tomato and soybean in parts of China, India, Iran, Nepal, Sri Lanka and Thailand.  The annual loss due to GBNV was estimated to be over US $ 89 million in Asia (Reddy et al. 1995).  It was reported that the Tomato Spotted Wilt Virus (TSWV), transmitted by WFT caused the World wide economic loss amounting to over US $ 1 billion during 1900s (Rugman Jones et al. 2010).  Similarly, Watermelon Bud Necrosis Virus (WBNV) has resulted in severe yield loss on various cucurbitaceous hosts in India (Jain et al. 2007).

It is feasible that the WFT might have established themselves in the hilly terrains of Ooty as the climatic conditions appear to be congenial to maintain both the sexes in the same spot. If that habitat serves as a reservoir, then it is possible for WFT to disperse to other parts of the country along with the ornamentals, vegetables and fruits grown in and around Ooty.  There could be a possibility of posing threat to the potato cultivation in the Nilgiris by the GBNV vector, WFT.  Moreover, the tourists from other parts of the country take seedlings and other planting materials from the Niligiris for further propagation which would inadvertently result in the dispersal of F. occidentalis to other temperate regions of northern and southern India.  Under such circumstances, it is imperative for the country to have an effective quarantine mechanism to prevent the spread of this notorious pest from the high mountain ranges of the Nilgiris.

Hood, J.D. (1914). On the proper generic names of certain Thysanoptera of economic importance. Proceedings of US National Museum 16: 34–44.

Wilson, T.H. (1975). A monograph of the subfamily Panchaetothripinae (Thysanoptera: Thripidae). Memoirs of the American Entomological Institute 23: 1–354.