Abstract: Bird communities in Tamhini Wildlife Sanctuary in the northern Western Ghats were studied using line transect and point count methods from the year 2011 to 2013.  The updated checklist of birds at the Sanctuary is now represented by 164 bird species.  The present study reported 35 new records to the area, while 15 earlier reported bird species were not observed.  Overall, 55 insectivorous, 19 omnivorous, 14 granivorous, nine piscivorous, eight frugivorous, eight carnivorous and six nectarivorous species were observed.  Out of these, 98 were residents, 17 winter visitors, three vagrant visitors and one was summer migrant.  Four restricted range species were recorded from the Sanctuary as Nilgiri Wood Pigeon Columba elphinstonii, Malabar Grey Hornbill Ocyceros griseus, White-bellied Blue Flycatcher Cyornis pallipes and Crimson-backed Sunbird Leptocoma minima.  Human activities such as pruning, cutting, grazing, fires, quarrying, trailing and camping were also reported in and around the Sanctuary.

Copyright: © Vinayak & Mali 2018. Creative Commons Attribution 4.0 International License. JoTT allows unrestricted use of this article in any medium, reproduction and distribution by providing adequate credit to the authors and the source of publication.

Acknowledgements: We would like to express our deep sense of gratitude to the villagers of Tamhini and tribal people for their support during the field surveys.  We are thankful to the forest department for providing geographic limits of the Sanctuary.  We acknowledge Dr. Mandar Datar for sharing his insights on the flora of the sanctuary.  We thank our friends Avishkar Munje, Anish Pardeshi, Shekhar Marathe and Dhairyashil Jagdale for their support during the fieldwork.  We thank Rohan Jogalekar and Swapnil Thatte for proving some field photographs. We specially thank Amruta Chavan and Amir Mulla for thier off field support.

TWS is spread across Pune and Raigad districts of Maharashtra, India. The Sanctuary spans over 49.05km2 of geographical extent between 18020’–18030’N & 73021’-730 30’E and altitude ranging from 560–1,050 m.  Vegetation in this northern part of the Western Ghats is broadly classified as tropical semi-evergreen forest (Champion & Seth 1968).  The secondary vegetation formations include patches of open forest, scrubs and grasses.

The base map of the Sanctuary was prepared by using Gram ++ software and sampling sites locations were collected and imported to the software by using Global Positioning System (Garmin, GPS 60).

Surveys were conducted using line transects at 12 accessible sites and point counts at three dense and inaccessible sites (Bibby et al. 2000), covering six major habitats, viz. dense forest (Fd), open forest (Fo), sparse open forest with scrub (Fs), cliffs and plateaus with rocks and grasses (C), agriculture (A), and water bodies (W) (Fig. 1; Images 1–4).  These habitats were walked between sunrise to 10:00hr from October 2011 to September 2013.  Birds were directly observed by binoculars (Olympus: 8x40, 10x50) and calls of species were used to confirm the presence of species; however, species were recorded only after their sighting.  Identification of most of the bird species was possible on the field, while for the ambiguities in identification, Grimmett et al. (2011) was referred.  Sightings of bird species were ranked according to following abundance categories-—Stray (S) (1 or 2 sightings), Occasional (O) (3–5 sightings), Uncommon (U) (6–15 sightings), Common (C) (16–25 sightings) and Abundant (A) (>25 sightings).  Cumulative number of species recorded was plotted against number of samples.  Migratory status and feeding guild of species were observed and referred to literature (Pande  2003; Grimmett et al. 2011).

The updated checklist of birds at TWS including present and past records, now contains 164 species (Table 1; Images 5–16).  The present study alone reported 149 species belonging to 59 families and 17 orders, of which 119 within TWS while 30 were just outside TWS limit.  Past survey in 1997–98 (Padhye et al. 2007) reported 102 species.  Highlights of the present survey includes 35 new records of species to the area, 87 common species to that of the earlier survey; 84 of which were recorded within sanctuary and three were recorded outside the sanctuary limits, while 15 species from the past survey were not reported.  Feeding guild wise classification of 119 birds species reported within sanctuary limits includes 55 insectivorous, 19 omnivorous, 14 granivorous, nine piscivorous, eight frugivorous, eight carnivorous and six nectarivorous birds.  Of the total, 98 were residents, 17 winter visitors, three were vagrant visitors and one was summer visitor from Konkan region.  The highest number of sightings of species was recorded in agriculture (A), followed by sparse open forest with scrub (Fs), open forest (Fo), dense forest (Fd), water bodies (W) and cliffs and plateaus with rocks and grasses (C).

The study revealed that four species were restricted to a single habitat.  Among this the Indian Vulture was observed nesting and roosting only at higher cliffs of the sanctuary with around 20 individuals and six active nests, while Nilgiri Wood Pigeon, Orange-headed Thrush and Crimson-backed Sunbird were reported only from the undisturbed dense semi-evergreen forest.

The present study brings out an updated checklist of bird species, with considerable addition to the earlier recorded avifauna.  It also provides critical information on their habitats along with the abundance in terms of number of sightings.  Though TWS is comparatively small with an area of 49.05km2, it has a high diversity of habitats and rich avifauna including threatened and endemic species.  It houses the locally rare Niligiri Wood Pigeon and globally rare Indian Vulture.  These species are facing population decline, and hence the recent declaration of the Tamhini region as a Wildlife Sanctuary, would go a long way in ensuring protection of such species.  Reduction in existing human disturbances such as pruning, cutting, grazing, fires, quarrying, trailing and camping, would likely bring further change in the species composition and/or distribution (Vijayan & Gokula 2006).  Long-term studies on habitat-wise distribution of the species and impact of ongoing disturbances on bird communities are needed for providing inputs to better conservation of the avifauna and its habitats within the Tamhini Wildlife Sanctuary. 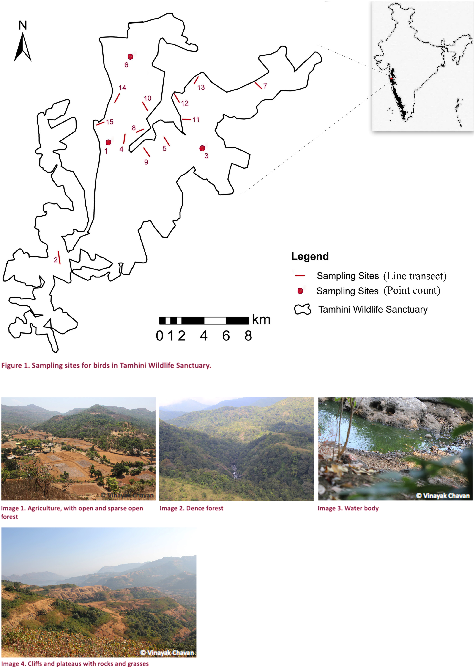