Copyright: © Sanghamithra & Nameer 2018. Creative Commons Attribution 4.0 International License. JoTT allows unrestricted use of this article in any medium, reproduction and distribution by providing adequate credit to the authors and the source of publication.

Acknowledgements: We thank Principal Chief Conservator of Forests (WL) & Chief Wildlife Warden, Kerala Forest Department for granting the permission to study the small carnivores of Silent Valley National Park (WL10-49846/2014 dated 15-05-2015). We thank Wildlife Warden of Silent Valley National Park, the Asst. Wildlife Wardens and other staff of the Silent Valley Division for helping with the logistics and other support in the field. Dr. Neelesh Dahanukar helped us with the analysis of the data. Devipriya, K. S., Aswathy Chandran, U. B., Aby Crusha, Vishnu, M., Niyas, P., Akhil Das, Jobin Joseph, and Sachin K Aravind accompanied us in the field on various occasions. Our thanks are due to the Dean, College of Forestry, Kerala Agricultural University for encouragement. The Kerala Agricultural University provided the financial assistance for the study. We are grateful to the anonymous reviewers and the Subject Editor for their critical comments.

The need to undertake biodiversity studies is accelerated by the rapid destruction of forests, particularly in the tropics including the Western Ghats.  The number of small carnivore species reported from different protected areas of Kerala vary, e.g., 11 species from Parmbikulam Tiger Reserve (Sreehari & Nameer 2016), nine species from Eravikulam National Park (Nikhil & Nameer 2017), and Wayanad Wildlife Sanctuary (Sreekumar & Nameer 2018).  The first record of Martes gwatkinsii from Parambikulam Tiger Reserve was reported by Sreehari & Nameer (2013), and the social behavior, feeding habits and activity pattern of Martes gwatkinsii were reported from Pampadum Shola National Park (PSNP) (Anil et al. 2018).  Sreehari et al. (2013) reported the presence of Herpestes smithii in Parambikulam Tiger Reserve and Chinnar Wildlife Sanctuary, and Herpestes fuscus in Parambikulam Tiger Reserve and Eravikulam National Park.  The lack of details on small carnivores from the Silent Valley National Park (SVNP), except on the sighting records of M. gwatkinsii (Christopher & Jayson 1996) and habitat characterization of M. gwatkinsii (Balakrishnan 2005), prompted the present study. We report the status and distribution of small carnivores in SVNP. 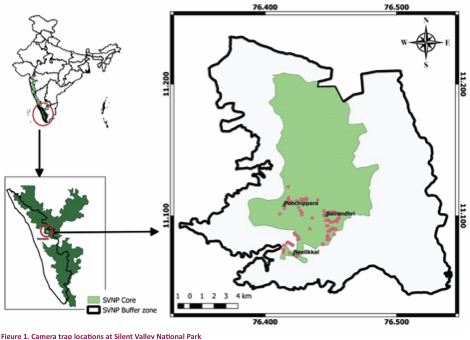 Digital scout cameras having passive infra red sensors for heat and motion detection (Cuddeback Attack model C1) were used for the current study.  Camera trap stations were placed in the west coast tropical evergreen forest (1A/C4) and southern montane wet grasslands (11A/C1/DS2).  Overall a 100 trapping stations (Fig. 1) were identified based on the presence of the indirect evidence of the small carnivores (Mudappa 1998). The camera traps were set at a height of 30cm above the ground and at least 250m apart from each other (Sreehari & Nameer 2016; Nikhil & Nameer 2017; Sreekumar & Nameer 2018).  The cameras were set up in default mode with the time-delay between pictures as fast as possible in daytime and the time-delay of five seconds between pictures during night time.  The camera trap locations were marked using Garmin GPS eTrex 30.  The cameras were kept open for 24 hours a day.  The date and time of exposure were automatically recorded by the camera on the images, as and when the images were taken.  At each trapping stations, each camera was opened for 15 days.  Thus, a total of 1,500 camera-trap days, monitoring 36,000 hours were carried out in the Silent Valley National Park.  The data analysis was done using the statistical packages such as the XL STAT (Version 2016.03.30846), and PAST (Hammer et al. 2001).

Microhabitat parameters were documented at each of the camera trapping sites.  Microhabitat parameters that are crucial for the survival of the small carnivores, such as, canopy height (clinometer), canopy cover (visual estimation), height of shrubs (stems <10cm girth at breast height) and ground vegetation (herbaceous plants <50cm in height, measured with tape), litter depth (average of four measurements taken around the trap using a calibrated probe), and basal area of trees >30cm girth, densities of shrubs (within 2m radius), trees, climbers, buttresses and canes, and distance to the nearest large tree (measured with a tape to a tree >60cm girth), frequency of natural hollow in the trees etc., were taken in the camera trapping sites.  At each camera trap site, a circular plot having a dimension of 5m radius was taken and 100 such plots were enumerated for the microhabitat parameters listed above.  Thus, a total of 7,850m2 area was sampled.  The relationship between these microhabitat variables on the distribution of small carnivores in the study area was analysed using discriminant analysis.

We recorded seven species of small carnivores in SVNP representing four families such as Viverridae, Herpestidae, Mustelidae and Felidae.  This comprises two  herpestid, mustelid, and viverrid species each, and one felid species (Fig. 2; Table 1).

Of the total 607 photographs of all the mammals (20 species) obtained, 165 images (seven species) were of small carnivores.  The most common species recorded was Viverricula indica (72, 44%) followed by Paradoxurus jerdoni (33, 20%) (Table 1).  The camera trap success rate of small carnivore was 10.90%.

Out of the three species of viverrids (Nameer 2015) of Kerala, V. indica (Image 1) and P. jerdoni (Image 2) are found in SVNP.  V. indica was the most common species of small carnivores, photo-captured 72 times (Fig. 3), between an altitudinal range of 900–1,200 m, and from the rainforests as well as from the grasslands.  In the previous studies done in the Kerala part of the Western Ghats in Parambikulam Tiger Reserve (Sreehari & Nameer 2016) and in Wayanad WS (Sreekumar & Nameer 2018), V. indica was the most abundant species of small carnivore.  Mudappa (2002), however, had reported that the V. indica is the most common small carnivore in the drier forests of the southern Western Ghats and rare in the tropical wet evergreen forests.

Paradoxurus jerdoni (Image 2) is an endemic small carnivore restricted to the rainforests of the Western Ghats (Rajamani et al. 2002).  P. jerdoni was the most common small carnivore in Kalakkad-Mundanthurai Tiger reserve followed by V. indica (Kumar et al. 2002).  A total of 33 captures of P. jerdoni were obtained during the study period from SVNP, and there was a single direct sighting in the night (06 October 2015) from Sairandri (Fig. 3).  All the captures of the P. jerdoni were from the tropical evergreen forest and between the altitudes of 900–1,200 m.

Four species of mongoose are known from the Western Ghats (Mudappa 2013) of which two species, Herpestes vitticollis and H. fuscus are seen at SVNP.  The H. vitticollis (Image 3) is a wide-spread species of small carnivore that occurs in well-wooded habitats of the Western Ghats (Ramachandran 1985; Madhusudan 1995; Mudappa 2013; Rompaey & Jayakumar 2003; Pillay 2009; Kumara et al. 2014; Sreehari & Nameer 2016; Nikhil & Nameer 2017; Sreekumar & Nameer 2018), and the northernmost distribution range is Kolhapur and Sindhudurg districts of Maharashtra (Punjabi et al. 2014). During the present study, 27 captures were obtained, and there were also two independent sightings of the species from Sairandri (07 October 2015) and another from Panthanthode (24 February 2016) (Fig. 4).

H. fuscus (Image 4) is found in the forests of the southern Indian hill ranges at 900–1,850 m (Mudappa 1998) and is also seen in Sri Lanka (Phillips 1984).  The previous records of this species from the Western Ghats are from Parambikulam Tiger Reserve (Sreehari et al. 2013; Sreehari & Nameer 2016), and Eravikulam National Park (Sreehari et al. 2013; Nikhil & Nameer 2017).  During the present study, 10 captures were obtained between an altitude range of 900 and 1,200 m (Fig. 4).  In southern India, H. fuscus is found from an altitude range of 492 and 2,032 m and is reported from different hill ranges of the Western Ghats such as Coorg, Nilgiri Hills, Palni Hills, Anamalai Hills, High Wavy Mountains and Agasthyamalai Hills (Sreehari et al. 2013; Mudappa & Jathanna 2015).

Martes gwatkinsii (Image 5) is endemic to the Western Ghats and is currently listed in the IUCN Red List as Vulnerable (Choudhury et al. 2012). During the present study, two captures were obtained in the camera trap near a fig tree (Ficus sp.) in the evergreen forest (Fig. 5). M. gwatkinsii is also reported from various parts of the Western Ghats including Kalakkad-Mundanthurai Tiger reserve (Kumar et al. 2002), and Karnataka State (Kumara & Singh 2007; Krishna & Karnad 2010).

Of the two species of the otters seen in the Western Ghats, only the Aonyx cinereus could be found in SVNP that was captured five times during the current study (Fig. 5, Image 6), and all the captures were above 1,000m.  The only previous records of the Aonyx cinereus from the Western Ghats were from Eravikulam National Park (Perinchery et al. 2011; Nikhil & Nameer 2017), Anamalai Tiger Reserve (Prakash et al. 2012) and Wayanad WS (Sreekumar & Nameer 2018). There is, however, a record of this species from the northern Western Ghats in Maharashtra (Punjabi et al. 2014).

The differential preferences for microhabitat variables in the study area by small carnivores were examined using discriminant analysis (Table 2).  This helps to understand whether there is any niche partitioning between and among the species concerning the habitat variables studied.  The pair-wise Fisher’s distances (blue cells) and associated P values (red cells) clearly show that there is no significant difference in the clusters, thus indicating that the selected small carnivores show no significant niche partitioning (Table 3, Fig. 6). 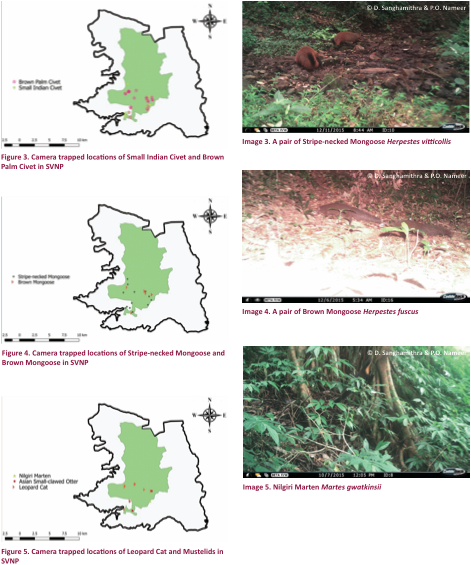 The Silent Valley National Park which constitutes one of the few pristine rainforests of the Western Ghats is a home for many endemic and threatened species including small carnivore fauna.  Even though some of the high-altitude areas of the SVNP could not be surveyed due to logistical reasons, it supports seven species of small carnivores.  The disturbed habitats are vulnerable to incursions by more widespread species at the cost of restricted range species.  The absence of widespread species of small carnivores in the national park indicates the intact habitats of SVNP.