Copyright: © Jadhav et al. 2018. Creative Commons Attribution 4.0 International License. JoTT allows unrestricted use of this article in any medium, reproduction and distribution by providing adequate credit to the authors and the source of publication.

Freshwater turtles are a key component of biodiversity in aquatic ecosystems, aiding other animals and plants by scavenging on dead animals and plants in the aquatic ecosystem.  They not only form the major component of freshwater biomass but also participate in the aquatic food web and assists the co-dependent species thus helping in the energentic operation of the ecosystem.  Without turtles, aquatic ecosystems would progressively degrade in ways yet to be understood, and would undergo loss of biodiversity (Iverson 1982; Congdon & Gibbons 1989).

Studies on freshwater turtle specific to the Goa region are scanty; therefore, baseline data on the existence and distribution of freshwater turtles is deficient.  For managing and conserving natural habitats, information on the distribution of a species is imperative (Rubin et al. 1998).  The present study was conducted to address this lacuna in knowledge, which will further aid in identifying threats to turtle populations and in devising appropriate methods for their conservation.

Goa is the smallest state in India and is located along its central-west coast (Fig. 1).  It is situated at the latitude 15.299320N and longitude 74.1239960-E.  The mountainous region of the Sahyadris in the east, the middle-level plateaus in the centre, and the low-lying river basins along with the coastal plains form are the three main physical divisions (Rao 1985–86) of this region.  The average rainfall is 2500–3000 mm.  The mean daily temperature is around 300C and the maximum temperature is 360C.  The climate is humid throughout the year, with humidity level ranging from 75%–95% in the monsoon.  The main feature of the climate is the southwest monsoon that occurs between June and September.  Champion & Seth (1968) classified the major forest types of Goa into west coast tropical evergreen, west coast semi-evergreen, and southern moist deciduous forest.

Potential sites (rivers, wetlands, streams, ponds, agricultural lands, and forest areas) were visited and transect walks were carried out to observe turtles in the wild throughout the geographical region of Goa; 186 sites (Table 1) were surveyed across Goa as shown in Fig. 1.  The sites were randomly selected and were readily accessible.  The study was conducted from June 2012 to May 2015 across seasons (summer: March–May, monsoon: June–August, post-monsoon: September–November, and winter: December–February) following the methodology of Akbar et al. (2006).  Active searches in the undergrowth were carried out using visual encounter method (Litzgus & Mousseau 2004).  Basking turtles were observed and directly counted.  Dip net was used for the capture of turtles (Spinks et al. 2003).  Netted animals were counted, their species identified, and then released back into the same water.  All freshwater turtles encountered during the study were identified up to species level following Smith (1933), Tikader & Sharma (1985), and Das (1985, 2008).  The exact location and altitude of the area were recorded using GPS (geographical positioning system) to depict the pattern of distribution of freshwater turtles.  Potentially suitable habitats were also identified.  In sites where no turtles were captured or encountered, it was assumed that the site had no turtles or that they occurred at very low densities (Lin et al. 2010).  Turtles captured opportunistically by local volunteers were also considered.

During the survey conducted from June 2012 to May 2015, a total of 337 individuals (334 individuals of native species and three individuals of introduced species) of three species of freshwater turtles belonging to three families, viz., Trionychidae (Indian Flap-shell Turtle Lissemys puncata), Geomydidae (Indian Black Turtle Melanochelys trijuga) and Emydidae (the invasive Red-eared Slider Trachemys scripta elegans) were recorded.  Melanochelys trijuga (Image 1) was the most abundant species and comprised of 52.23% (n=176) of the total individuals encountered, followed by L. punctata (Image 2) comprising of 46.88% (n=158), and T. scripta elegans (Image 3) comprising of 0.89% (n=3).

Of the 186 sites surveyed, freshwater turtles were encountered at 181 sites.  Melanochelys trijuga was the most widely distributed species and was recorded from 132 sites, followed by L. punctata, which was reported from 113 sites, and T. scripta elegans, which was rare and was reported from only three sites.  At 67 sites both M. trijuga and L. punctata were recorded (Fig. 1).

It was observed that freshwater turtles exhibit nocturnal habits and are active mostly during night, dusk, and dawn.  A few individuals were also found while crossing the road.   During the day hours, they mostly remain submerged in water, bury themselves in soil, or stay hidden in crevices and moist leaf litter.  It was observed that M. trijuga was distributed throughout the state of Goa.  L. punctata was recorded in all terrains except rocky habitats and mountainous regions (Western Ghats).  Melanochelys trijuga was recorded in slow- and fast-moving rivers and ditches at low and high elevations, in wetlands, agricultural lands, ponds and streams on plains, plateaus, and mountainous areas, and in artificial drainages in urban areas.  L. punctata was encountered in slow-moving waters, wetlands, agriculture lands, ponds, and streams on plains.  Trachemys scripta elegans was encountered in a pond (Taleigao, Tiswadi Taluka), a residential area (Upasnagar, Marmugoa Taluka), and in a river (Khandepar, Ponda Taluka).  The number of turtles of all the three species found in different habitat types is given in Fig. 2.  ANOVA showed that the distribution of freshwater turtles in different habitats was highly significant (df=12, F=4.23, p=0.00024).

Distribution of turtles varied with seasons.  During monsoon they were encountered at all 180 sites, whereas in summer and winter they were observed at only 50 and 72 sites, respectively.  The highest number of individuals was encountered during monsoon season (Fig. 3).  ANOVA showed that the encounter of freshwater turtles varied significantly with seasons (df=6, F=1.44, p=0.24). 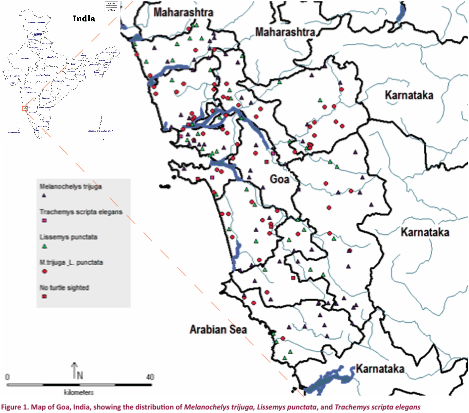 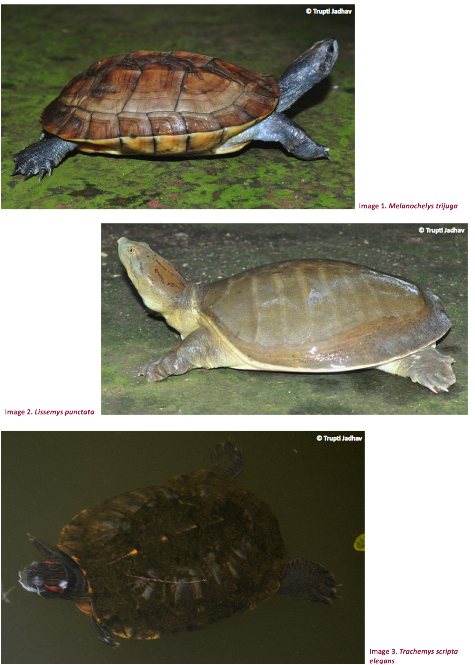 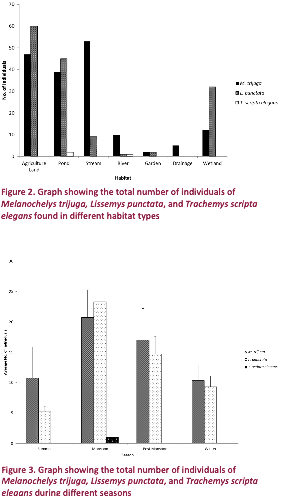 Reptile species inhabit distinct microhabitats and are not randomly distributed in space (Heatwole 1982). The findings with respect to the two native species augment to that of Murthy & Das (2009) and Tikader & Sharma (1985).  The presence of Nilssonia leithii, however, was not reported during the present study.  The presence of T. scripta elegans was recorded for the first time in the state of Goa.  Trachemys scripta elegans a native of Mississippi Valley area (Pendlebury 2006) was imported to other countries in pet trade (Pendlebury 2006), which eventually led to illegal trade (Pupins 2007).  Its impact on the native turtle species in Goa, however, needs to be investigated.

It was observed that M. trijuga and L. punctata were widely distributed and occupied all potential habitats (agricultural fields, ponds, wetlands, gardens, drainages, rivers, and streams) across the State of Goa.  Similar habitats were reported by Tikader & Sharma (1985) for both the species and by Hoassain et al. (2008) for L. punctata.  Lissemys punctata, however, was not reported from the hilly areas of the Western Ghats during the present study and M. trijuga occupied all the possible habitats, including drainages, in the urban setup.  M. trijuga was found to be the most abundant species (52.22%), followed by L. punctata (46.88%) and T. scripta elegans, which was the rarest (0.89%).  Lissemys punctata preferred agricultural fields (37.97%), ponds (28.48%), and wetlands (20.25%), and was rarely sighted in streams (5.69%), gardens (1.27%), and rivers (0.63%).  No individuals of L. punctata were found in drainages.  The highest encounters of L. punctata were in agricultural fields and the lowest were in rivers and gardens.  This suggests that L. punctata prefers marshy areas and stagnant waters that might assist in burrowing, which provides protection from predators.  This also elucidates their absence in hilly regions where the stream beds consist mostly of pebbles and rocks that possibly will not serve as good refuge grounds.  Hossain et al. (2008) reported that marshlands and agricultural fields were the most preferred habitats of L. punctata, followed by ponds, streams, and lakes.

The encounter of freshwater turtles in different seasons was significant when tested statistically.  Highest numbers of individuals were encountered in monsoon and post-monsoon season, which may be attributed to favorable climatic conditions and rich prey base, as compared to summer and winter, when the resources required for survival are limited, thus restricting the distribution of species.  Similar observations were made in other groups of reptiles such as snakes by Sawant et al. (2010).  Thus, the present study reports the presence of three species of freshwater turtles in Goa, namely, M. trijuga, L. punctata, and T. scripta elegnas.  Melanochelys trijuga is generalized in habitat selection thus making it the most widely distributed species in the state of Goa and L. punctata is more specific in habitat selection thus restricting its range to coastal, middle-level plateau, and foothills of Western Ghats.

Das, I. (2008). A Photographic Guide to Snakes and other Reptiles of India. Om Books International, New Delhi, 144pp.

Heatwole, H. (1982). A review of structuring in herpetofaunal assemblages, pp. 1–19. In: Scott, N.J., Jr. (ed.). Herpetological Communities: A Symposium of the Society for the Study of Amphibians and Reptiles and the Herpetologists’ League. Fish and wildlife service, United States, 239pp.

Iverson, J.B. (1992). A Revised Checklist with Distribution Maps of The Turtles of The World. Privately Printed, Richmond, Indiana, 363pp.